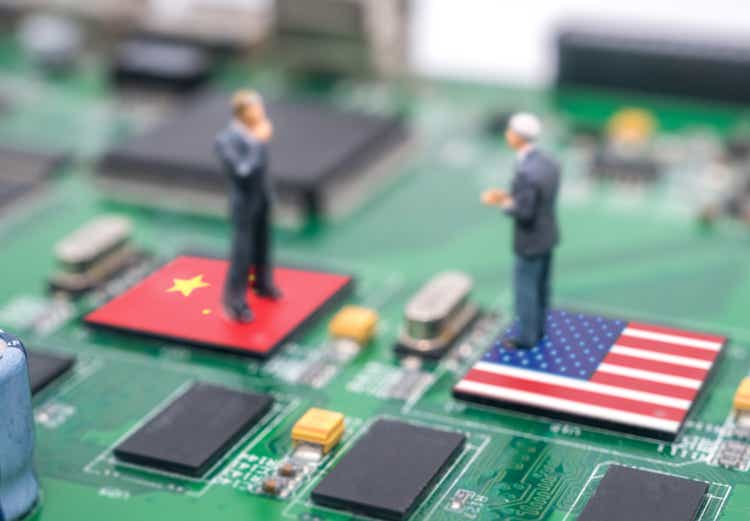 The U.S. CHIPS Act is a counterpart to China’s “Made in China 2025” with the objective the U.S. establish a degree of domestic chip self sufficiency and supply chain resiliency.

The worsening situation across the Taiwan Strait has heightened the need to reduce the mounting risk facing U.S. industries that are increasingly dependent on semiconductors from Asia.

And these funds also come with strong guardrails, ensuring that recipients do not build certain facilities in China and other countries of concern. And that’s where U.S. equipment companies such as Applied Materials (NASDAQ:AMAT), the largest seller of equipment into China will suffer in the mid term.

Long term, sale losses to recipients in China, which will be filled by domestic companies, means continued erosion of sales by U.S. companies as Chinese equipment companies continue to improve technology and performance.

Illustrating the strong performance of ACMR as an example of China’s equipment prowess in overtaking foreign competitors, if I compare Q2 2022 / Q1 2022 revenue for the non-Chinese companies, none of the manufacturers had greater growth than ACMR’s 93.8%, as shown in Table 1.

Chart 2 shows semiconductor equipment imported into China. Noticeable are the strong revenues in the past four quarters. This has important implications. I noted in a Feb. 9, 2021, Seeking Alpha article entitled “Applied Materials Could Move To Top Of WFE List With A Knockout Quarter:”

Thus, the strong growth in China imports were due, in part, to hoarding of equipment in anticipation of the sanctions. In fact, ASML sold 81 DUV immersion systems in 2021, compared with four from Japan’s Nikon Corp., giving the Dutch firm a 95% market share.

Table 2 shows the total revenues of equipment sales to China in Q1 2022 as well as the percentage of total company revenues. Applied Materials not only garnered the most revenues, its percentage of total revenues at 39% are the largest of peers. This is a negative if the U.S. injects more sanctions on equipment to China. Already, KLAC and Lam Research (LRCX) noted in their earnings call that this is a possibility.

In Q1 2022, domestic revenues reached 9.8%, and the data from ACMR is a harbinger of things to come in China eliminating foreign semiconductor equipment suppliers.

Prior to the voting of the CHIPS Act, Congress weighed restricting access of American chipmaking equipment to memory chip makers in China, including Yangtze Memory Technologies Co. (YMTC). The U.S. also looks to prohibit the export of tools to China used to make NAND chips with more than 128 layers. Applied Materials and LAM Research are the primary suppliers.

YMTC’s 232-layer NAND is now comparable to those from Micron, Samsung Electronics, and SK Hynix (OTC:HXSCL). While the announcement introduces an intriguing new option, it’s not clear when YMTC will be able to make the leap to mass production to catch up to competitors and compete for a larger market share.

YMTC was able to achieve parity with non-Chinese peers without any U.S. sanctions. The EUV lithography sanctions are in place, but NAND doesn’t need EUV.

On a financial metrics basis, Chart 3 shows 1-year share performance of top non-Chinese equipment suppliers impacted by the CHIPS Act. AMAT shares are -19.35% and the worst of the competitors, in alignment with the company’s continual market share loss to competitors due to inferior processing equipment. KLAC’s performance has outpaced the competitors, as its process control equipment continues to be needed as semiconductor companies move to smaller nodes.

I also compare performance of these companies with the VanEck Semiconductor ETF (SMH), whose 1-year performance is -10.31%, significantly better than AMAT’s.

TOLEY will benefit as it’s a Japanese company and not under the umbrella of the U.S. government. In the long term, AMAT will fare the worse because if its exposure to (1) China and (2) NAND. The company is navigating through two downturns in the next year because of:

(1) Its exposure to memory as capex is lowered due to poor consumer electronics equipment sales.

(2) Overcapacity in foundry companies coming in 2023, with AMAT the largest exposure to foundries.