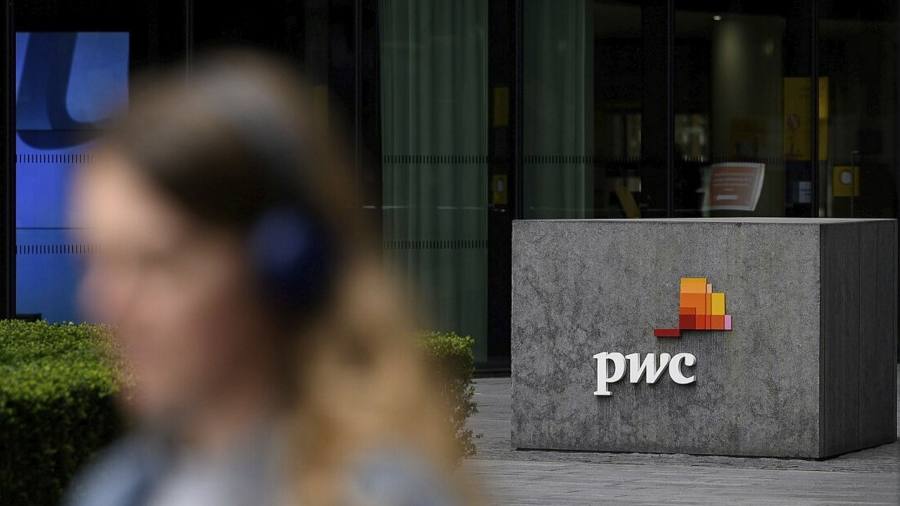 PwC partners in the UK were paid an average of more than £1mn for the first time last year, buoyed by a jump of one-third in the firm’s consulting revenues and the disposal of part of its business.

The results kicked off what is expected to be another season of bumper UK earnings for the Big Four accounting firms, which also include Deloitte, EY and KPMG. But PwC warned that inflation and rising wages were likely to reduce partner pay in the current year.

It handed half of its 24,000 UK employees pay rises of at least 9 per cent in July in an effort to attract and retain staff in a hot labour market and to respond to rising inflation.

Kevin Ellis, UK chair and chief executive, said that because salary rises had increased PwC’s cost base, “I expect the average partner income to come down next year in line with that investment.”

Demand for the firm’s services would remain strong because companies would still need advice on adapting to changes in technology and supply chains, Ellis predicted.

The former restructuring adviser also said he expected an uptick in corporate insolvencies.

Asked whether PwC would make changes if rival EY goes ahead with plans to split its audit and advisory businesses, Ellis said: “We are committed to [being] a multidisciplinary firm. And I think I’m going to be quite relieved that I’ve still got a very strong insolvency practice.”

Total profits for PwC UK, which includes the firm’s Middle East business, rose 19 per cent to £1.4bn in the 12 months to June 30. Profits were more than £1.5bn after accounting for the UK element of the $2.2bn sale of PwC’s global mobility business, the proceeds of which were shared among the locally owned firms that make up PwC’s international network.

Distributable profits for PwC’s 995 UK and Middle East partners, who own and run the business, rose to an average of £1,025,000, with the top earners being paid significantly more.

The figure included £920,000 in trading profits, up from £818,000 a year earlier, plus an average of £105,000 per partner from the sale of the mobility business, which advises companies on immigration and other matters when they move their staff internationally. The rest of the sale proceeds were retained for investment in the business.

Revenues reached £5bn for the first time, including £1bn in the Middle East. The rise was helped by a 33 per cent increase in sales by the consulting business, which overtook audit as the biggest division.

The decision to honour all job offers throughout the pandemic was the “biggest driver” of the firm’s growth, Ellis added. “I was able to carry on recruiting people in consulting [which suffered a 6 per cent fall in revenues in the 2021 financial year before rebounding in 2022], because . . . I had an audit business, deals business and other things that were performing,” he said, contrasting the model with EY’s plans to break itself up.

The surge in the consulting business was driven in part by an increase in managed services contracts — long-term projects where companies outsource the running of internal systems or implementation of technological changes.

Ellis said that in a break from the past, his firm was noticing more clients “want our people to hold their hand” in the execution of projects instead of simply providing strategic advice.

Sales at PwC’s risk advisory division rose 13 per cent to £516mn while its other business lines — audit, tax and deals — each grew by between 6 per cent and 9 per cent.

PwC and its partners were fined almost £7mn in the past year for audit failings at three UK-listed companies. Ellis said the firm had invested in improving audit quality but that “there will always be human error — we sign 4,000 audits a year”.