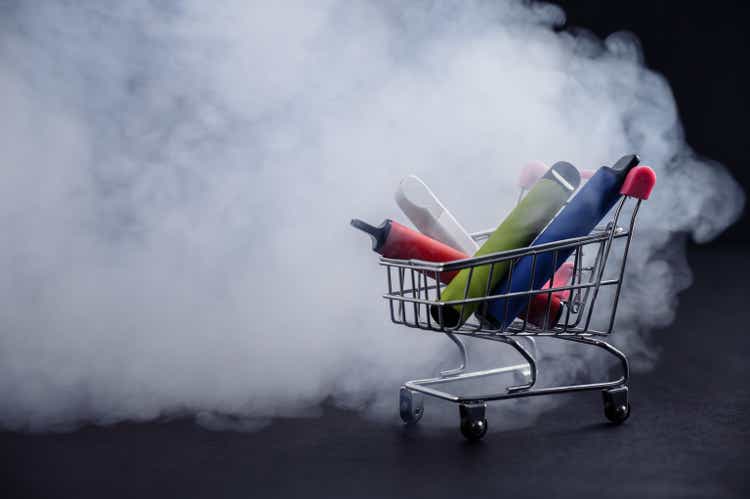 I recently wrote an article on Altria (MO) explaining why I think it is way too cheap, despite several authors talking about the terminal decline thesis for the tobacco industry. Another business that I own in the tobacco industry is British American Tobacco (NYSE:BTI). It has many of the same characteristics, from high margins, a cheap valuation, and a large dividend, but there are some differences to consider as an investor.

British American Tobacco is one of the large tobacco companies with a market cap of $92B. They have been more successful in their transition to reduced risk products than Altria and have three growing product lines that look to be a focus of the business in the future. They were forced to write off their Russian assets in the first half of 2022 as many European and US companies exited Russia. Like Altria, the valuation is still very cheap.

Shares trade at 9.2x earnings, which is well below the average multiple. While many investors choose to avoid the tobacco industry, a single-digit earnings multiple is too cheap for a business with the margins of British American Tobacco. The company does have more debt than Altria, but with the amount of cash that the business produces, I’m not worried about the balance sheet. Investors get paid a 6.8% dividend to wait and the company continues to buy back stock at an impressive rate. There are some differences between the two companies, but like Altria, British American Tobacco is a strong buy today for income investors.

While Altria has admittedly botched the transition to the so-called reduced risk products with their stake in Juul, British American Tobacco has been much more successful. They have Glo, Vuse, and Velo as alternatives to the traditional tobacco products. All three divisions are growing and figure to be a larger part of the business in the future. They did have lower profit in the first half of 2022 due to the large impairment of their Russian assets. It’s not ideal, but it shouldn’t create any long-term issues for British American Tobacco. While the first half of 2022 was mixed for the company, the valuation is still very cheap.

British American Tobacco is trading at a single digit P/E multiple of 9.2x. That is well below the average multiple of 13.4x. I think we are due for multiple expansion, especially with EPS projected to rise nearly double digits in the next couple years. Some could even argue that British American Tobacco deserves a higher multiple than Altria because they have been more successful in their rollout of reduced risk products.

British American Tobacco is a different business than Altria, but a lot of the same arguments apply here. High margins, a wide moat, a cheap valuation, and a big dividend should all drive attractive forward returns. All it would take is a little bit of multiple expansion to go with a 6.8% dividend to get to double digit returns.

While most investors wouldn’t naturally be interested in the tobacco industry, the high yield is likely what attracted income investors looking for current income. While the dividend growth might not be huge, I think we will continue to see dividend hikes moving forward. One of the other things to consider with British American Tobacco’s dividend is the foreign exchange rates. They might hike the payout, but that doesn’t mean it will increase in dollar terms, especially with the strong dollar we have seen in recent months.

The other thing to get excited about is the buyback program. British American Tobacco authorized a $2B pound repurchase program and used a large chunk of that in the first half of 2022. They used $1.3B of that in the first half of 2022 to repurchase 37.7M shares. I think we will continue to see repurchases at a rapid rate, which will help boost EPS. Buying back shares at these valuations should be a huge driver for long-term returns, which I expect to be well above the 10% double digit threshold.

British American Tobacco is a business that checks many of the boxes that I look at when I’m evaluating investments. They have a cheap valuation that provides a large margin of safety. For a business with impressive margins like British American Tobacco, a single digit earnings multiple doesn’t make a lot of sense to me. While the company is similar to Altria, there are some characteristics that make it a different company. They have been better with their transition from traditional combustibles to reduced risk products, but they were forced to take an impairment on their Russian assets and have a balance sheet with much more debt. Investors are probably looking at double digit returns driven by the cheap valuation, a 6.8% yield, and the continuation of a large buyback program. In my opinion, the risk/reward is skewed to the upside with British American Tobacco and patient income investors might want to consider a long position.