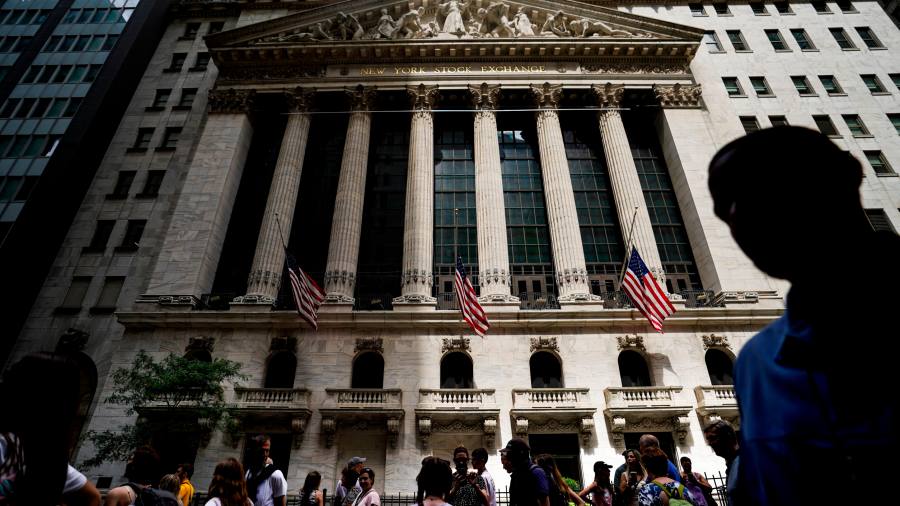 The dollar and short-dated US government bond yields dropped on Tuesday after worse than feared business activity surveys and home sales data sparked fresh concerns over the health of the US economy.

An index of the greenback against half a dozen peers fell 0.5 per cent in New York trading, reversing a powerful gain in the previous session. The euro, which is by far the biggest weight in the dollar index, rose 0.4 per cent to $0.9974, having earlier traded as low as $0.9901.

In fixed income markets, the yield on two-year US Treasuries, which reflect expectations for monetary policy, slid 0.08 percentage points to 3.25 per cent.

The falls mark a sharp reversal from the previous day when expectations that Federal Reserve policymakers will take a hawkish stance at this week’s economic symposium in Jackson Hole, Wyoming, sent the dollar and short-term bond yields rising.

Sales of newly built homes fell 12.6 per cent in July to an annualised rate of 511,000 units, the commerce department reported on Tuesday. Analysts had anticipated a much smaller drop of 2.5 per cent, according to a Refinitiv survey.

Separately, a survey of executives showed that a fall in business activity in the vast American services sector unexpectedly accelerated this month.

The S&P Global services purchasing managers’ index came in at a 27-month low of 44.1 in August, from 47.3 the previous month, much worse than the rise to 49.2 that was expected. A reading below 50 points to a contraction.

The weak US data provided a boon for Wall Street stocks, which fell sharply in the previous trading session as investors bet signs that the US economy may avoid a sharp slowdown would give the Fed the green light to continue with aggressive rate rises.

The S&P 500 was up 0.4 per cent in morning trading on Tuesday, with the tech-heavy Nasdaq Composite adding 0.8 per cent. Europe’s Stoxx 600 share index slipped 0.2 per cent.

The moves came ahead of the Jackson Hole central bankers’ symposium, at which Fed chair Jay Powell is expected to underline a commitment to raising interest rates to tackle stubbornly high inflation.

“Chair Powell is likely to state that the Fed will raise rates as far as it takes, and for as long as it takes,” said Steve Englander, strategist at Standard Chartered.

Minutes from the Fed’s July monetary policy meeting — at which it raised its main interest rate by 0.75 percentage points to a target range of 2.25 per cent to 2.5 per cent — showed that policymakers discussed keeping rates at levels that would restrict the US economy.