Lucid Stock: Deal Of The Year This Black Friday (NASDAQ:LCID) 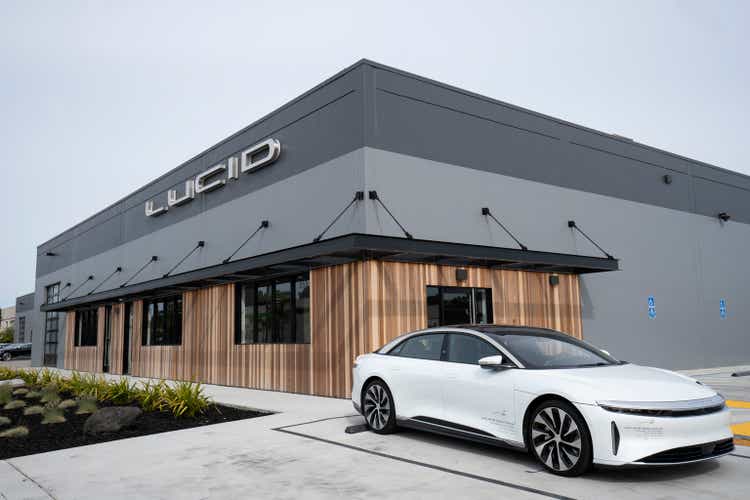 Lucid’s (NASDAQ:LCID) Air is a remarkable vehicle, notably the Dream Edition. The performance version delivers 1,111 horsepower, nearly 500 miles of range, and a relatively inexpensive $169,000. Where else can you buy a fantastic EV with a supercar-like performance below $200K? The only company coming to mind is Tesla (TSLA), with its high-end Model S models. The exciting thing about Lucid is that you can get the Air vehicle in very different configurations that range widely in price. This model diversification is an excellent managerial decision, as consumers can choose what Lucid car fills their needs best.

The price range of Lucid’s vehicles is exceptionally versatile, almost like offering five individual models simultaneously. The Air Sapphire can hit zero to sixty in just 1.89 seconds, putting it performance-wise right up with the Tesla Model S Plaid. However, despite the slightly higher price tag, the Air has a more modern design than the outdated Models S. Therefore, Lucid’s versatile Air segment should draw substantial demand in the coming years. Lucid has an impressive SUV coming that should compete directly with Tesla’s Model X.

Moreover, Lucid is also planning to launch a midsize luxury sedan in 2025. This new product could eventually mean the introduction of a crossover from the company as well. Lucid’s strategy seems like it’s coming right out of Tesla’s playbook, and the company may pull it off. A midsize luxury sedan would make Lucid a direct competitor to Tesla’s Model 3 and other top EVs in the space. EV sales are exploding, and if Lucid eats into some of the Model 3’s market share, its revenues could skyrocket in future years.

Lucid has been on a wild ride over the last two years. The stock hit a post-SPAC deal high of around $65. We see Lucid trading around its pre-SPAC IPO price of ten bucks, a whopping 85% below the company’s ATH. However, despite the poor price action, now is the time you want to buy this stock. Investors were greedy at $50-60, and they are fearful now when the stock is at $10. The downside potential is minimal now, and Lucid’s stock price should recover soon. Lucid is a unique company with hyper-growth potential in the lucrative EV space. The company is already producing thousands of vehicles and should expand operations significantly in future years. Lucid’s stock is dramatically oversold. Lucid should increase revenues substantially, illustrating solid profitability potential and driving its stock price considerably higher in the coming years.

Lucid’s Valuation: Not So Ludicrous

In 2021, Lucid had around $27 million in revenues. This year the company could have about $750 million. Next year’s revenues are set to surge to approximately $2.6 billion, roughly a 250% YoY gain. Moreover, we should see substantial 50-100% YoY growth for several years with Lucid. The company could rake in $12-15 billion in revenues by 2026 (higher-end estimates). If the company pulls off this performance, Lucid’s stock may be trading at around 1.2-1.5 times 2026 expected sales, which is more than affordable.

Moreover, the company has extraordinary potential to continue growing revenues for many years while continuously improving its profitability potential. It’s critical to remember that Lucid is a young company, and like Tesla and other top start-up EV manufacturers, Lucid will need to go through an unprofitable stage. Nevertheless, as the company’s economies of scale capabilities improve, Lucid should become increasingly profitable in future years.

What Lucid’s stock price could look like in future years:

Provided that Lucid can produce 400,000 vehicles annually, the car company should achieve massive revenues in future years. If we use a modest $75,000 ASP, 400,000 cars could amount to around $30 billion in annual revenues. Along with its new factory in Saudi Arabia, Lucid plans to have a production capacity of approximately 500,000 vehicles annually by mid-defaced. Combined, the two factories should enable Lucid to achieve around $35-40 billion in revenues annually. Therefore, Lucid could expand revenues more rapidly than projections imply. Lucid’s stock can move substantially higher, increasing by tenfold or more by the end of the decade.

While I am bullish on Lucid, risks exist. Lucid may run into production issues slowing the trajectory of its revenue growth. Moreover, the company can remain profitless for longer than expected, leading to lower multiples. Additionally, there is increased competition from Tesla and other automakers. Therefore, Lucid may run into demand issues due to the relatively high cost of its vehicles. The downturn could also impact sales, and the stock could be in for more volatility in the short term. Investors should examine these and other risks before committing an investment in Lucid.