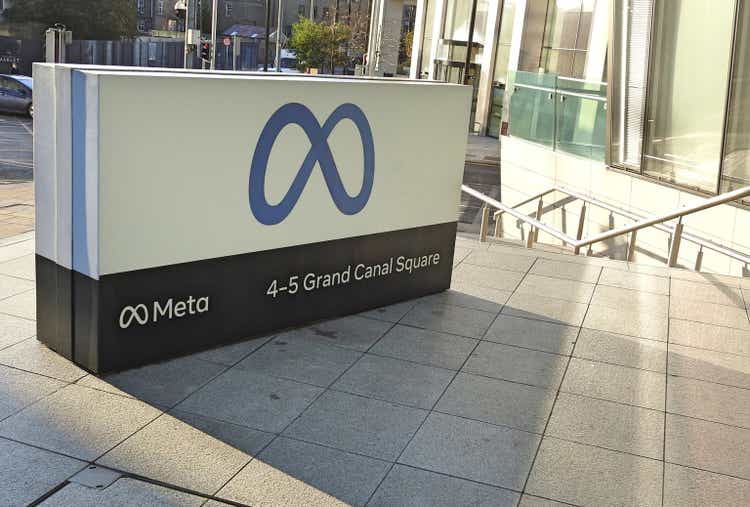 Based on share price alone, the move into the metaverse has not gone well for Meta Platforms (NASDAQ:META). Since the company announced in late October 2021 it was rebranding and refocusing on the metaverse, the stock is down over 45%.

Initially Mark Zuckerberg laid out fairly aggressive spending targets, only to walk them back as it was clear Meta’s core business wasn’t growing.

In fact, something interesting has happened to Meta’s core business. Growth has stalled and quickly turned negative.

Outside of Q4, where online advertising is boosted by holiday demand, Meta has not put up revenue over $30B since the iOS 14 changed privacy settings.

Clearly a first world problem having $30B in quarterly revenue, but unable to grow, in part because of iOS 14 changes. Ideally for investors, this is simply a temporary slowdown and the company can reaccelerate revenue growth.

Recently the company announced new incentive programs for users to be compensated for content they post. While this changes the economics for Meta, as the company has enjoyed millions of people posting content for free, it’s a step in the right direction as competition from TikTok and Google’s YouTube (GOOG, GOOGL) also share revenue with users.

However, it remains to be seen how these measures bring in increased ad dollars – something Meta eventually needs to prove to Wall Street. The biggest risk for investors, I think, is the core business’ best days are over.

Usher in the metaverse. Believed to be a long-term project, not only from Meta’s ability to generate revenues, but for mass public adoption.

One way Meta could accelerate its metaverse ambitions is through acquisitions of the young startups that crop up.

Meta did this in October 2021 when it agreed to acquire Within, a Los Angeles based developer with a popular fitness app on the Oculus called Supernatural.

At the time, the terms of the deal were not announced, however it appears Meta agreed to pay $400M for Within. The amount is known because the Federal Trade Commission, or FTC, is suing to block the transaction.

While it’s not odd for the FTC to be involved in acquisitions made by one of the world’s largest companies, it’s unusual given the $400M price tag and the fact the metaverse isn’t widely used.

Additionally, the FTC’s staff, made up of lawyers and economists, recommended that the FTC not sue to block the transaction. However, the commission’s chair Lina Khan has overruled and decided to bring the case to a judge.

The trial date is set for December, in what is sure to be closely followed by many investors.

That’s because this trial could set a precedent mega cap companies like Meta are not used to. Blocking “smaller” deals for essentially startups not even related to Meta’s core revenue generating business is unheard-of. In fact, Meta has already acquired numerous other app makers over the years.

It also brings into question larger deals, for example Microsoft’s (MSFT) planned takeover of Activision Blizzard (ATVI). If Meta can’t acquire Within, Microsoft, I think, might as well head to an ATM and withdraw the $3B breakup fee it will owe Activision.

Seems unfathomable that a U.S. District judge wouldn’t see this case in favor of Meta, but I’m no lawyer. Most research I could find indicates this is a pivotal case for Meta, the metaverse, and the FTC’s future ability to challenge these types of acquisitions.

That’s why this is such an important case for Meta. Win easily and acquiring any metaverse startup that gains traction is a viable strategy. Lose, and it brings into question if Meta can ever successfully scale up its ambitious plans.

The case takes on even more meaning if Meta is unable to reaccelerate its core business.

However, Meta was able to build a dominant position in social media through many small acquisitions and much larger ones via Instagram and WhatsApp. If that strategy is off the table because of an aggressive FTC, investors will likely be relying on the core ad business for an extended period of time.

Seems reasonable, even for a company where growth has been reined in considerably. However, Google trades at 4.73x 2023 sales and 19.75x 2023 earnings. Meaning Meta could certainly expand its multiple a bit, but the stock isn’t wildly undervalued compared to Google, which seems to have less challenges with iOS 14 and isn’t trying to pivot the business.

Additionally, these are simply revenue estimates, which have been slashed over the past year as Meta’s challenges become more evident. A prolonged economic slowdown in key markets for Meta might mean forward multiples are a value trap.

Meta looks cheap on the surface, but risks remain. The core business needs to reaccelerate, which will be challenging based on competition, iOS privacy settings, and the macro environment.

The shift into the metaverse was always going to be a long process. One that becomes even more challenging if Meta is unable to acquire smaller companies.

These challenges are priced into Meta’s stock to a certain degree. However, if the FTC is granted permission to block Meta’s $400M Within purchase, it creates another roadblock Meta must maneuver.