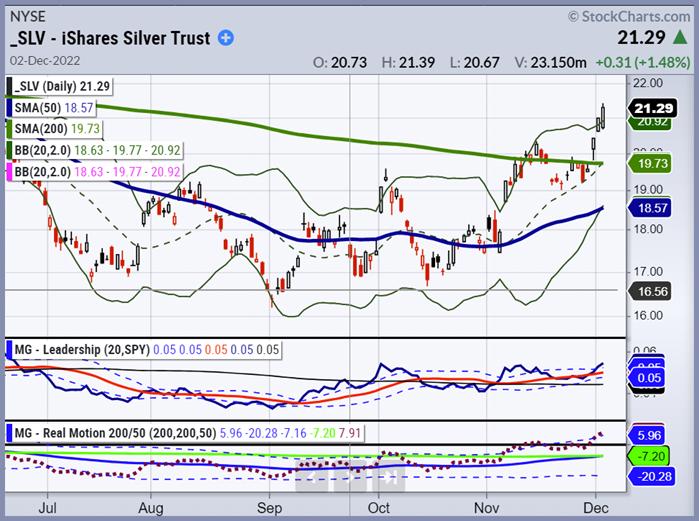 While investor sentiment continues to be tugged and pulled, precious metals continue climbing.

Silver (SLV) is forecast to lead gold prices higher. We like both the yellow metal and the white metal. We are long in both and have taken profits along the way.

Silver ended the week at $21.29 after bottoming around $16.00 in September. It crossed over the 200-day moving average and crossed above the Bollinger bands after a 17% run in November. With inflation remaining on the long-term horizon, silver and gold are poised to continue to increase in value.

Here are some ideas on how to inflation-proof your trading. 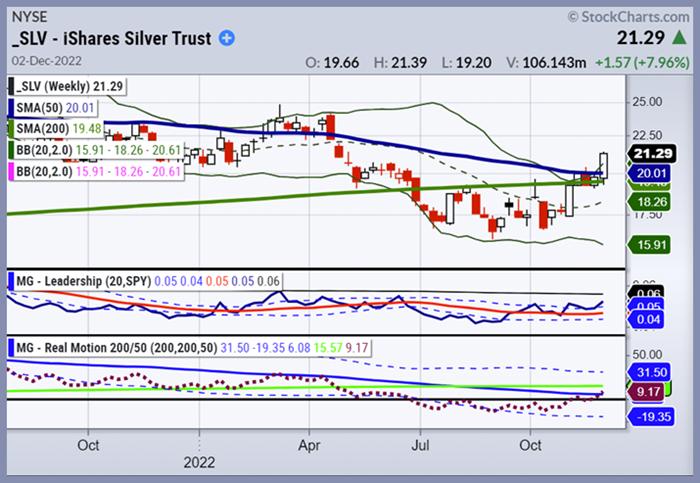 When analyzing the trend or a trade-in Gold, it’s a good idea to look at Silver because these precious metals tend to be more reliable when they are in sync.

On the weekly chart above focusing on SLV, our proprietary Real Motion Indicator displays that Silver’s price can continue higher. SLV is above the Bollinger Bands, so might indicate potential consolidation. Our Triple Play Indicator also exhibits strong leadership performance relative to S&P 500 (as represented by SPY), indicating Silver should continue further leadership.

Last week, softer CPE came in and the US Dollar declined. On Friday, the ISM manufacturing index fell sharply, and employment data showed 263,000 new jobs were added. The employment report from yesterday is another illustration of why the Fed will fight inflation for much longer than most people anticipate. The Fed’s continued tightening could eventually lead to a recession, or worse. That’s why investing in assets that appreciate faster than inflation is necessary.

Silver is a valuable resource that should be on every investor’s radar. Here are two reasons to hold silver.

1.  The Gold to Silver ratio

The ratio measures the amount of silver it takes to buy one ounce of gold to silver. The gold to silver ratio is about the same as in 1980, so silver is incredibly cheap compared to gold.

More than a third of India’s silver consumption is for jewelry, with the remaining going to the industrial sector, silverware, and photovoltaics. Demand is robust, and imports of silver are almost back to a previous high of 9,000 tons in 2015. 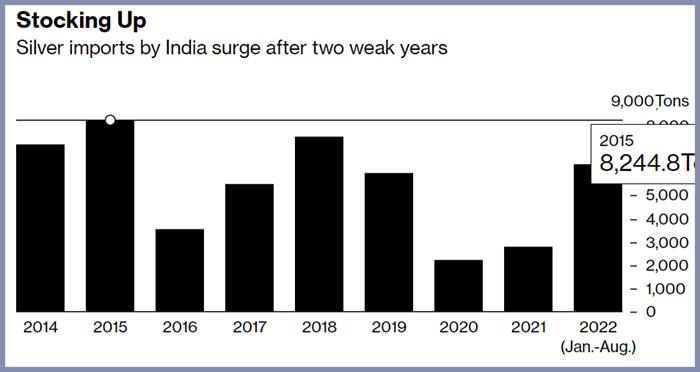 In the UK, data representing the volume of silver held in London custodian vaults in October 2022 were 26,502 tons, valued at $16.3 billion, or 883,417 silver bars. This is the lowest amount of silver held in the vaults since reporting started in July 2016.

This same precious metal can help you protect your portfolio during turbulent times.

“I grew my money tree and so can you!” – Mish Schneider

Get your copy of Plant Your Money Tree: A Guide to Growing Your Wealth and a special bonus here.

Mish talks stagflation in her interview by Dale Pinkert during the F.A.C.E. webinar.

Mish hosted the Monday, November 28 edition of StockCharts TV’s Your Daily Five, where she covered some of the Modern Family. She also discusses the long bonds and gold with levels to clear or, fail.

Director of Trading Research and Education 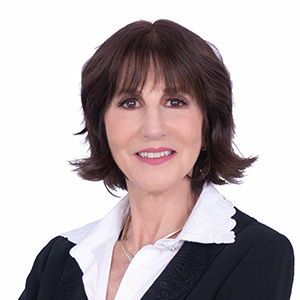 About the author:
Mish Schneider serves as Director of Trading Education at MarketGauge.com. For nearly 20 years, MarketGauge.com has provided financial information and education to thousands of individuals, as well as to large financial institutions and publications such as Barron’s, Fidelity, ILX Systems, Thomson Reuters and Bank of America. In 2017, MarketWatch, owned by Dow Jones, named Mish one of the top 50 financial people to follow on Twitter. In 2018, Mish was the winner of the Top Stock Pick of the year for RealVision.

Subscribe to Mish’s Market Minute to be notified whenever a new post is added to this blog!