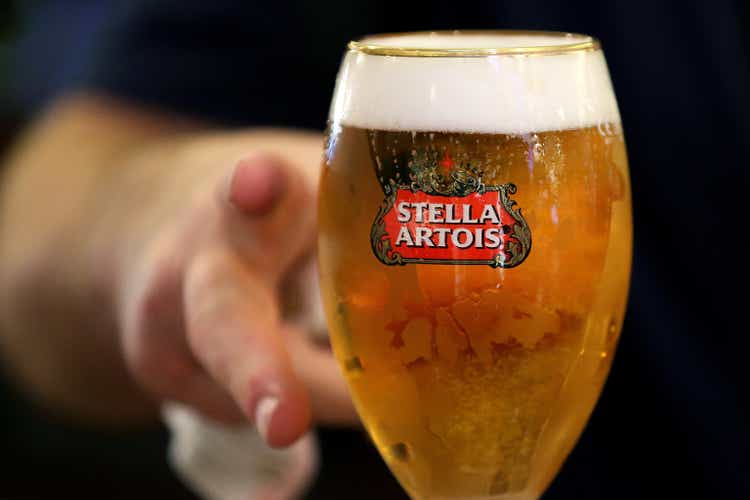 Anheuser-Busch InBev (BUD) (‘AB InBev’) has been dead money for years. The company was a serial acquirer and has a history of stretching its balance sheet to fund these acquisitions and that has worked against the company from an investment perspective. The vast majority of the free cash flow is going towards debt reduction and the dividend was cut to a measly 0.50 EUR per share. Despite these elements, I have started to build a position in AB InBev as the deleveraging exercise is continuing.

The first half of the year wasn’t bad at all

In the first half of this year, the largest beer brewing company in the world saw its revenue increase by almost 10% to just over $28B. Unfortunately, the COGS increased by in excess of 15% which means the gross profit increase remained limited to less than 3%. Fortunately, the other operating expenses didn’t increase at all: yes there was an increase of almost $300M in the distribution expenses but this was almost fully compensated by lower SG&A expenses. That’s good, as this helped to boost the operating profit by about 5% to $7.1B. After including the non-recurring expenses to the tune of $105M, the reported operating profit came in at exactly $7B.

I was a bit surprised to see the higher net finance cost of $2.3B (up from just over $2B) but looking at the footnotes we see this was mainly related to losses on derivatives and FX. As you can see below, the ‘pure’ interest expense actually decreased by $100M in the first semester.

We also see an additional $1.14B negative impact related to the ‘non-underlying share of results of associates’. This is related to an impairment charge on the Efes subsidiary in Turkey. This pushed the pre-tax income down to $3.7B resulting in a net income of less than $2.5B of which $1.7B is attributable to the shareholders of AB InBev for an EPS of $0.84 per share. That’s about 30% lower than in the first half of last year.

However, AB InBev also disclosed the adjusted results excluding these non-recurring items came in at $1.42, slightly lower than the $1.46 in H1 2021 but the underlying earnings per share increased from $1.30 to $1.33. The latter includes the impact from hyperinflation and the derivatives in place to cover the impact of share-based payments.

With a total capex of $2B, AB InBev generated in excess of $4B in free cash flow. However, this includes the $800M in income attributable to minority interests so it is only fair to deduct this from the cash flows as well. By doing so, ABI generated roughly $3.2B or $1.6/share in free cash flow in the first semester.

This went relatively unnoticed as ABI invested $3.5B in its working capital. So once these elements can be monetized, we should see a substantial multi-billion dollar cash inflow further reducing the net debt. Meanwhile, both the gross debt as well as the debt ratio have been continuously trending lower.

Why does the market remain unimpressed?

First of all, inflation will play a very important role. As prices for the key components of beer and other beverages in AB InBev’s product offering are increasing, the company will have to continue to hike its prices. BUD has already increased prices worldwide but another round of price hikes is likely needed and this could raise the question if this will reduce the consumption by its consumers.

We did see a volume decrease in North America but fortunately, this was more than offset by increases in the other Americas and the EMEA. That being said, we should keep an eye on the evolution of the volume after the next set of price increases.

Secondly, the market is clearly worried about InBev’s massive debt pile. As of the end of June, ABI had about $7B in cash but $1.3B in short-term debt and about $82B in long-term debt resulting in a net debt position of approximately $76B (down from about $83B at the end of 2020). Fortunately, all of the debt is staggered. In the next three years less than $3B is now due and between now and 2030 and this will allow ABI to build up its cash position ahead of the required refinancings in the second half of this decade.

$76B still is a lot of debt, but investors need to keep in mind ABI was smart enough to issue fixed rate bonds to cover the maturity of this debt. This means that the impact of interest rate increases should be pretty limited in the near future.

AB InBev is slowly but surely turning the corner. The company was up to its eyeballs in debt after the SABMiller acquisition, but that gross debt and net debt level is now gradually walked down. The interest expenses will decrease and the net income and free cash flow will continue to increase.

Yes, there are near-term headwinds as inflation and the price of raw materials will continue to play an important role. That’s why I’m in no rush. But I will continue to write put options in an attempt to add to my existing position. On its European listing for instance, a P45 (in Euro) expiring in March next year yields an option premium of approximately 1.85 EUR.