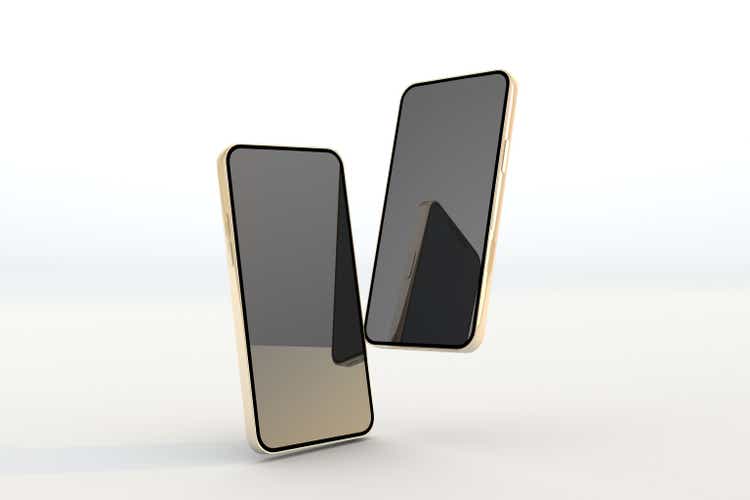 Apple (NASDAQ:AAPL) has amazingly already rallied towards the all-time high of $183 following a rather weak June quarterly report. The market appears to have ignored the weak prospects for the business and the likely flat results for the important iPhone division. My investment thesis remains Bearish on the stock already priced for perfection.

The tech giant had massive sales pulled forward in the prior years due to covid and the release of the 5G iPhone with the iPhone 12 in late 2020. Actual flat iPhone production for 2022 would actually be seen as a success considering other parts of consumer electronics have seen demand collapse.

According to CounterPoint, Apple captured 44% of the global smartphone market in 2021 with $196 billion in annual revenues. The smartphone market saw sales jump last year due to a pickup from Covid demand pulled forward and the launch of key 5G phones.

One of the main points for the sales growth from Apple last year was the ASP surging 14% YoY to reach an incredible $825. In comparison, Samsung didn’t even generate half the smartphone revenues in 2021 with an ASP dipping to just $263.

Apple has always successfully pushed forward higher prices when adding new features to smartphones not always available to other manufacturers. Influential analyst Ming-Chi Kuo suggests Apple is about to boost the ASP of iPhone 14 phones by 15% to at least $1,000, which doesn’t appear possible.

Over the course of 2 years, Apple would’ve boosted ASPs by over 30%. The 2020 ASP was $724 and a general 15% price boost to all iPhones would boost the ASP to $949. A mix of older iPhones sold at lower prices reduces the average ASP. Of course, Apple might only increase the price for the iPhone 14 Pro series so that the average ASP only rises by 15% due to a mix shift to the higher-end phones.

Of course, a big part of the ASP increase is the forecast by Ming-Chi Kuo for the demand to shift more towards the Pro version with the higher prices. The fact that Hon Hai/Foxconn alters their revenue targets to “growing” from flat isn’t a very good indication that Apple will in essence grow iPhone sales by 15% primarily from just higher ASPs.

According to a poll by 9to5Mac, consumers have a very mixed view of buying an iPhone 14 Pro at a higher sticker price. About 47% of consumers seem willing to pay up to $100 more for a new iPhone Pro, with at least 30% not willing to pay any price hike. Remember, this website is for diehard Apple fans, and the view appears very mixed on paying much higher prices for an iPhone 14 phone.

A major suggestion for the price increase is a doubling of the base storage to 256 GBs adding an additional $50 to the cost. If this increases the cost to Apple, a lot of any ASP hikes might end up in only the top line, not the bottom line.

Investors loading up on the stock are expecting Apple to smash current analyst estimates. Clearly, too many people are extrapolating a combination of the iPhone production numbers with the higher ASPs to extract a massive growth figure.

Analysts don’t agree with such growth estimates predicting FY23 and FY24 revenues to grow less than 6%. A lot of investors aren’t catching onto the fact that Apple didn’t regularly smash analyst estimates outside of the covid pull forward period. The average EPS beat over the last 4+ years has only been 3% to 5% after eliminating the big 2020 and 2021 beats.

Anywhere less than a 5% EPS beat on limited growth forecasts won’t amount to material increases in earnings above current exceptions. The forecast for FY24 EPS of $6.82 doesn’t become much more than $7 over the course of a few years of minimal beats.

The stock already trades at 25x FY24 EPS targets for less than 6% growth. The market is wildly extrapolating these ASP increases into 15% or more growth. The data above suggests Apple will have a hard time keeping volumes up on higher prices for Pro versions of the iPhone. Consumers loaded up on smartphones in 2021 and a recessionary environment likely precludes both iPhone volumes and ASPs from rising.

Investors should use this rally back close to all-time highs as another opportunity to exit the stock.