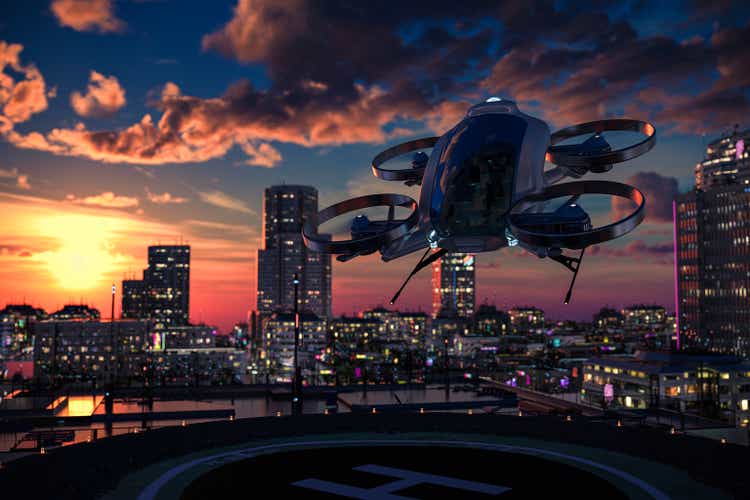 On the Farnborough International Airshow, we had the traditional manufacturers present their orders and tentative agreements. These manufacturers include Boeing (BA), Airbus (OTCPK:EADSF) (OTCPK:EADSY), ATR and Embraer (ERJ) with order announcements for their popular turboprops and single aisle aircraft. However, disruptive technology is also entering the market space in the form of eVTOLs which are electric vertical take off and landing (eVTOL) vehicles that are set to revolutionize urban air mobility and could provide disruptive technology in other areas as well. One of the eVTOL players that made an announcement during the Farnborough Airshow is Eve (NYSE:EVEX). In this report, I will have a look at how the disruptive technology stacked against the current technology solutions in terms of value and also highlight its applications.

Disruptive technology, but no competition to Boeing or Airbus

The easiest thing we can say about eVTOL is that just like any Boeing 737 or Airbus A320, an eVTOL flies but that is about all they have in common. eVTOLs are in essence a competition to helicopters providing a product crafted for urban air mobility built with a different mindset. Helicopter taxis or shared vehicle services do exist, but helicopters are relatively complex and that feathers into the acquisition costs as well as operating costs, which make helicopters less suited for mass application and transport.

eVTOLs are purpose built for urban air mobility in an attempt to decongest urban areas but also could be providing mobility solutions in underdeveloped areas. In order to really play a meaningful role in solving the congestion issues, the eVTOLs have to be cheap in operation costs so unlike helicopters they are built with new technology to enable cost reductions in acquisition, operation, increase flexibility and reduce environmental footprints. Just for comparison purposes, an eVTOL would sell for around $3 million while helicopters that Airbus sold during the airshow while different in application fields sell for $5 million to $10 million. That is not to say that all eVTOLs will be an instant success. On the contrary, while the technology and application is promising most eVTOL manufacturers are unlikely to make it over the longer term as competition will be fierce and market penetration will take time. Time and money that not all companies will have.

One of the companies that has a somewhat attractive position in the eVTOL space is Eve. The company is a spin off from the innovation division of Embraer and that might actually serve the company well. To design and manufacture an eVTOL a background in aerospace engineering is a must, but having a wide network coming from Embraer, the equipment manufacturer knowledge and footprint of the Brazilian jet maker certainly will benefit Eve.

It is also something we saw at the Farnborough International Airshow where BAE Systems (OTCPK:BAESF) (OTCPK:BAESY) and Eve signed a Letter of Intent for 150 eVTOLs. Simultaneously this showed the interest in application of urban air mobility solutions in the defense market potentially further increasing the market potential of eVTOLs. This tentative agreement was signed between Eve, Embraer and BAE Systems whereas a separate Memorandum of Understanding will allow for the development of a defense focused eVTOL by Embraer and BAE Systems using Eve’s vehicle as a base.

At this point, we do see eVTOL companies at airshows so it is also interesting to look at what are they actually bringing to the airshows in terms of agreements. Our TAF Airshow Order Tracker, which we use to track and visualize order announcements shows announcements for over 600 aircraft with a value of nearly $24 billion. In a separate report, we will be making split outs to detail this announcement flow but for now I want to look at the share that Eve had in that flow. If we look at tentative agreements, we counted announcements covering 200 aircraft with a value of $1.9 billion. 150 out of the 200 aircraft or 75% was covered by the tentative agreement from BAE Systems with Eve for 150 eVTOLs and accounted for 21% of the value. So, clearly in terms of value the eVTOLs have a smaller share but that is just something that makes sense from product and application perspective.

With this report, I certainly don’t want to mark Eve or any eVTOL company as a buy. Instead, I want to point at how air mobility is evolving and the shifts we see because of that during airshows. No longer are we looking at orders for small ATR turboprop aircraft all the way up to the big Boeing 777-8F freighters for which Boeing had announcements, but there is a separate market with its own dynamics that aims to tackle a completely different problem. If successful, we might be seeing urban air mobility deals become an accustomed part of the order flow during future airshows. So, I would say during airshows but also outside of the airshows, pay attention to the eVTOL market. It is a market that is not suited for all investors, but certainly one worth following.