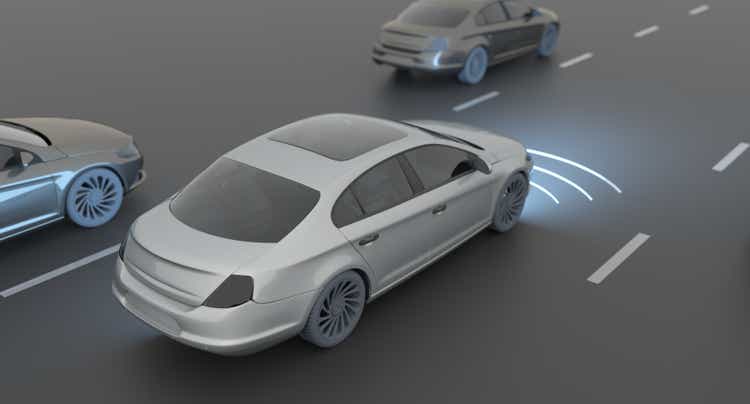 As discussed regarding other pre-revenue stories, Innoviz Technologies (NASDAQ:INVZ) is starting to be valued based on the order book and not the limited revenues. The stock has already doubled off the lows in a manner that hasn’t even kept up with order growth. My investment thesis remains ultra Bullish on the stock trading at a fraction of the order book size.

Nothing To See Yet

Innoviz reported meager Q2’22 revenues of only $1.8 million. The company actually buried the sales figure on page 3 of the earnings release due to the lack of relevance revenues in the June quarter have to the overall value of the business.

The big news sending the stock up 100% since the lows below $3 was the confirmation of Volkswagen AG (OTCPK:VWAGY) as the automotive OEM in a $4 billion order. The company suggested the deal involves only a small penetration of the over 10 million vehicles sold by Volkswagen per year in a sign of how massive the opportunity exists beyond this order.

Naturally, the deal will ramp up over time as more and more models are brought onto the Innoviz Lidar sensors. On the Q2’22 earnings call, CFO Eldar Cegla was clear the deal only maxes out at 14% of total annual Volkswagen production of 10 million annual units:

I would like to start by briefly explaining how our Volkswagen related $4 billion forward-looking order book was calculated. In terms of volume production, the Volkswagen group holds about 10% of the market share which translate to over 10 million vehicle sold annually. The program plan is based on three years of development and validation forward by 8 to 10 years of sales. With expectation to see growing take rate of 1% to 14% over the course of the program, starting with the more premium brands and car models and trickling down over the years to the less expensive car brands and models. We expect to supply our LiDAR sensors for at least 8 million cars over their lifetime of the program multiplied by the ASP aggregates to the $4 billion order book we have announced.

The company boosted the forward-looking order book from a previous level of $2.6 billion to over $6.6 billion now. Innoviz now has major automotive deals with both Volkswagen and BMW (OTCPK:BMWYY) providing a strong foothold in German carmakers. Along with a serial production deal with a L4 autonomous shuttle program, the company has 3 serial production programs moving forward with another 12 pre-production programs along with other programs in different stages of discussions.

With the company expecting another 2 to 3 auto OEMs to announce decisions on Lidar contracts, Innoviz has the opportunity to announce another big deal by year end. The stock doesn’t even need the company to build on the order book here, but Innoviz appears set to grab more orders with 12 automotive RFIs and RFQs in various stages of negotiations and product testing.

The company continues to promote a massive market opportunity with totals far beyond most estimates in the sector. Innoviz predicts a market opportunity of $38 billion in consumer vehicles alone, another $10 billion for robotaxis and shuttles plus an additional $6 billion for trucking. The large order book and recent $4 billion order alone from one auto OEM should wake up a Lidar sector where stocks generally trade far below SPAC deals.

Innoviz technically missed Q2’22 revenue targets by $0.14 million, but the stock is up 15% on the earnings call highlighting large opportunities to further expand orders. Clearly, the market didn’t believe the original deal announcement back in May prior to Q1’22 earnings.

Innoviz was a $6+ stock back in December far before announcing a massive $4.0 billion deal to go along with already solid orders. The recent rally only gets the stock back to 40% below the $10 SPAC deal that closed in 2021.

The stock has a listed market cap of $815 million based on a listed outstanding share count of 135 million shares. The fully diluted share count doesn’t include up to 16 million stock options exercisable at an average price of $5.55, plus RSUs not exercisable until over $9 and warrants only exercisable at $11.50. The exercise of the stock options and warrants would provide much needed capital for Innoviz and aren’t necessarily dilutive at this point.

Innoviz has a cash balance of $246 million with $29 million burned during the quarter. Naturally, the company is spending aggressively on R&D with $19.7 million in non-GAAP expenses during Q2 and total operating costs of $24.4 million while spending a few million quarterly on capex.

The stock isn’t valued on the greatly expanding forward-looking order book. The market cap is only 12% of the order book.

The key investor takeaway is that Innoviz Tech is exceptionally cheap based on the massive orderbook. The forecast is for a large step up in revenues over the next couple of years and the company should still see a further expansion of the forward-looking order book. The market isn’t accurately pricing the stock for the market potential.