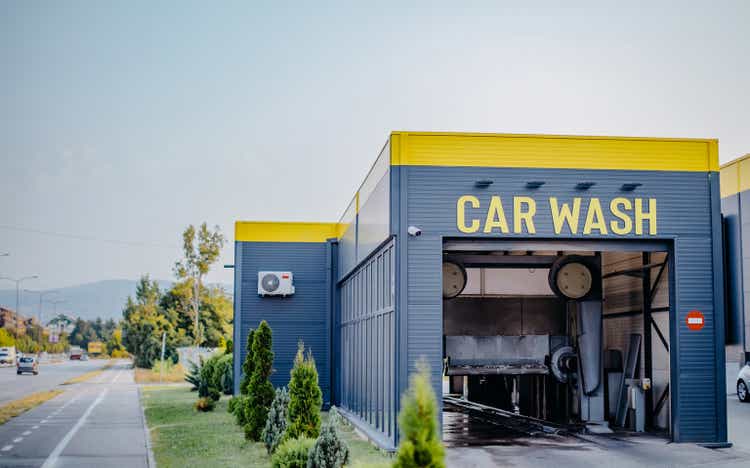 Late in 2021, I believed that shares of Mister Car Wash (NYSE:MCW) were not shining yet, even as the company kept on making acquisitions since it went public in the summer of last year. Given that shares have seen a huge decline so far this year, this is sufficient of a reason to update the investment case.

Mister Car Wash went public as the happy and fun car wash business has seen a solid debut, yet I believed that valuations were demanding from the get go, despite the solid growth prospects.

The company operated 344 locations across 21 states at the time of the offering, performing some 60 million car washes every year. With average washes coming in at $10, this is a sizable operation with 1.4 million members being quite loyal, on average going for 30 washes a year.

Founded in 1996, there is huge potential as there are some 300 million cars registered in the US with more than 2 billion washes performed each year, as the share of automatic washes versus do-it-yourself is substantial, and is increasing rapidly.

The company went public cat $15 per share as 296 million shares outstanding made that the company was valued at $4.5 billion at that level, for a $5.0 billion enterprise valuation if we include a roughly half a billion net debt load. This is a huge valuation given the number of locations, valuing each of these at around $15 million. This was a huge valuation for a business which generated $630 million in sales on which it earned $75 million in operating profits, that is for the year 2019.

Revenues fell to $575 million in 2020 for obvious reasons, yet the membership model in which fees were collected, but not many services were performed, made that operating profits rose to $105 million. Even if I believed at the time of the offering that operating profits might rise to $190 million, net earnings potential of $135 million would only come in around half a dollar. This resulted in a steep multiple at the $15 per share IPO price, as this was certainly the case as shares rose to $21 on the first day of trading. With just a 3% market share, the potential was there however, yet the high valuation prevented me from getting involved.

I picked up coverage again in December as shares had fallen to $18 at the time as the company has seen continued growth as the $0.50 per share earnings number actually looked a bit optimistic, or perhaps realistic, still translating into very steep multiples at $18 per share. In December, Mister Car Wash reached a $390 million deal to acquire Clean Streak, adding 23 locations and 10 development locations.

This price is less than the valuation of the own business on a per-location basis, as net debt would increase to $840 million, for 2.8 times leverage based on $300 million in EBITDA. While the situation looked a bit more compelling, the situation was still far removed from seeing real potential yet.

Expectations Have Come Down

Fast forwarding since 2021, shares of Mister Car Wash have fallen substantially, now trading at just $10 per share, down a third from the IPO price this time last year.

In March of this year, the company posted its 2021 results with fourth quarter revenues up 18%, marking that full year sales rose 32% to $758 million on which adjusted earnings of $136 million, or $0.44 per share were reported. Net losses were reported as huge stock-based compensation expenses were excluded in the adjusted earnings calculation, partially in connection to the IPO, as the normal run rate appears to come in around $25 million. That reveals that otherwise earnings come in at just below $0.40 per share.

After this strong year, the outlook for 2022 was lackluster. While revenues were set to rise to $885 million (at the midpoint of the guidance) on the back of acquisitions and comparable growth, adjusted earnings were seen flattish at $0.44-$0.47 per share as net debt was quite elevated at $876 million, with EBITDA posted at $254 million for the year, but set to rise a bit in 2022.

Following a solid start to the year, the company reiterated the full year guidance, but expectations came down in August alongside the release of the second quarter results. With inflation pressure on the rise, it is not just hurting margins of the company, it is hurting demand as well as this is really a luxury service, with consumers strapped to make means end by the end of the month. While total revenues were still up 15%, on the back of 2% organic growth, earnings have fallen on the back of this dynamic.

The truth is that car washing is far from an essential service, as the set-up is anything but great here in this inflationary environment. While spending a great deal of money on everyday essentials, such a service is not an essential as leverage is already full, but the simple reality is that earnings power is lagging, and the near term outlook simply is not that great.

While shares are down 50% from the highs soon after the public offering, the move in itself is appealing as the company does operate in a long term growth industry, with real potential for consolidation. The issue, however, is that valuations were way too demanding from the get go as the current pressure on the business is quite severe. This makes that appeal is still not to be seen, as some more polishing needs to be done before some beauty is seen here.