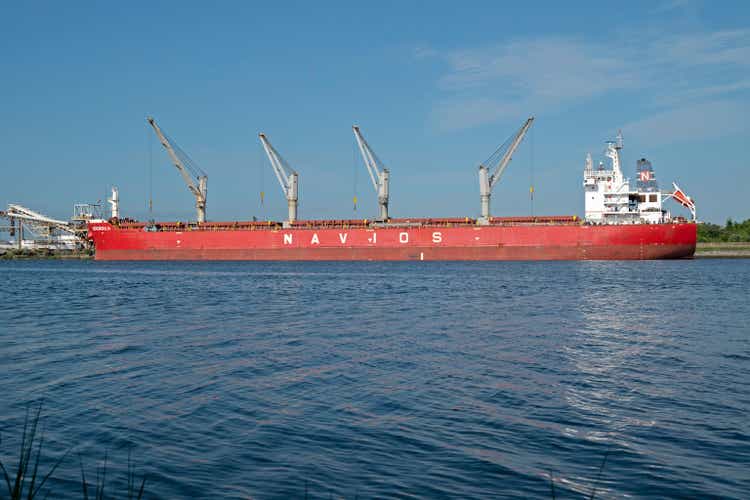 Our board authorized a unit repurchase program for up to $100.0 million. At current prices, this program would cover approximately 17% of the public float. The timing of the repurchases and the exact number of units to be repurchased shall be determined by the Company based on market conditions and financial and other considerations, including working capital and planned or anticipated growth opportunities. Total return to investors, we believe, is the way to measure our success, and will use this tool as a means of achieving this result for our unitholders.

Particularly the buyback announcement was well-received by investors as the company continues to trade at a steep discount to net asset value (“NAV”):

To be fair, Navios Partners has also provided investors ample reason for distrust in recent quarters:

Last year, the company’s controversial CEO and Chairwoman Angeliki Frangou engineered a bail-out for the group’s tanker segment and raised the required funds by selling new Navios Partners common units into the open market at a tiny fraction of net asset value.

The unitholder-unfriendly move resulted in 5% holder MRMP Managers LLC sending a letter to the company “sharing urgent and serious concerns regarding the current management and direction of the Company“:

While we are only holders of LP interests in NMM, we have serious concerns regarding Angeliki’s decisions that seem designed to benefit other entities in the Navios group. We believe these decisions run counter to her duty as Chairman & CEO of NMM.

Clearly, buying back common units at a massive discount to NAV would be a far superior capital allocation relative to acquiring vessels at 100% of net asset value.

But with limited partnerships usually being established to benefit the general partner, common unitholders can’t reasonably expect the company to spearhead principles of shareholder value.

Moreover, the Navios Holdings bail-out won’t result in additional dilution for common unitholders as the close to $400 million cash portion of the deal will be funded with cash on hand and $220 million in proceeds from the sale of two vintage containerships announced earlier this year.

With basically the company’s entire cash balance being used to fund the transaction, investors should not expect material buybacks in the near term.

With the long-standing Navios Holdings overhang now being addressed without additional dilution for common unitholders, at least in my view risks for investors have decreased substantially.

While near-term utilization of the new $100 million common unit buyback program will remain limited at best, Navios Partners might become more serious about repurchases next year.

With all business segments currently generating strong cash flow and no ailing related entities left out there, Navios Partners’ common units appear to have plenty of room for price appreciation.

For example, narrowing the discount to 50% of NAV would result in a price target of $70 per common unit.

In fact, increasing the common unit price considerably would be very simple exercise for Ms. Frangou. Based on my cash flow assumptions, the company could easily afford increasing its quarterly common unit distribution from a measly $0.05 currently to $1.00.

That said, I do not expect such a move for at least another couple of quarters as Navios Partners first needs to rebuild its cash position.

Despite the company now being active in the dry bulk, container and tanker markets, the common unit price has largely kept its correlation with the Baltic Dry Bulk Index (“BDI”) which is unlikely to change after the Navios Holdings fleet acquisition provided substantial, additional exposure to the dry bulk segment.

Speculative investors with the ability to stomach inherent volatility in shipping stocks should consider using setbacks to grab some Navios Partners units for their portfolio.

I will discuss the deal’s implications for Navios Holdings’ equity holders in a separate article next week so stay tuned.