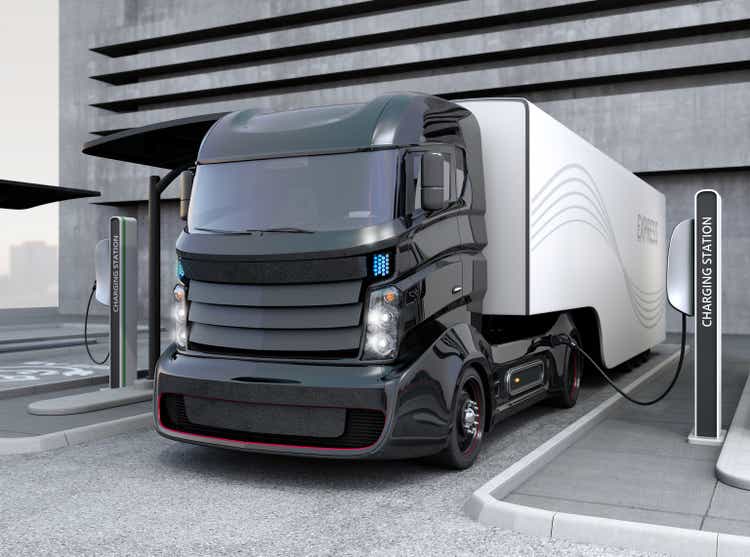 Most of the market probably doesn’t even realize that Nikola (NASDAQ:NKLA) has started delivering BEV trucks. The company once appeared a scam to some, but new management has shockingly built out most of the original business plan. My investment thesis is still Neutral on the stock due to the need to raise capital and obtain more truck orders to solidify the valuation.

The company had guided to Q2 production and deliveries of 50 to 60 BEVs and Nikola only delivered 48 trucks during the quarter. The company did deliver 4 Mobile Charging Trailers with an additional 2 trucks delivered during the first week of July.

The company continues to propose producing 310 to 510 Tre BEVs for the year, with an expected ramp to 5 units of daily production in November. Nikola forecasts just producing 70 to 80 units in Q3, providing limited production beyond the Q2 levels due in large part to the issues with obtaining battery charging infrastructure.

The company recently agreed to purchase Romeo Power (RMO) for ~$144 million in stock, in part due to the issues with obtaining battery packs. Romeo builds battery modules and packs for commercial vehicle applications, yet the company has struggled with operations.

The numbers definitely aren’t perfect, and a lot of questions still exist on the proprietary technology involved in building these BEVs. The pilot testing for Tre FCEVs and the building of the first fuel cell betas are all logically next steps here where Nikola expects to have a lead with the development of the hydrogen dispensing network.

An investor should now have confidence in Nikola ultimately reaching goals of expanding the Coolidge, Arizona manufacturing capacity to 20,000 units next year and the eventual launch of the FCEVs. The full business model appears within reach after the solid Q2.

The Q3’22 outlook speaks to the problems facing Nikola. The company sees the delivery of 65 to 75 units coming with negative gross margins of up to 250% due in part to some extra costs with Romeo Power price increases. On top of this normal issue with scaling production, Nikola forecasts spending up to $112 million for combined operating expenses.

The company burned ~$150 million of cash in the first quarter and forecasts spending up to $90 million on capex in Q3. Before the gross losses on each unit sold, Nikola should already burn up to $202 million in cash during the quarter from operating expenses and capex. The trucks alone should add another $50 million to the total cash burn.

The truck manufacturer ended Q3 with a cash balance of only $529 million and total liquidity of $842 million due to an available ELOC with Tumim Stone Capital LLC. The cash balances quickly deplete, with the Q4 ramp to triple production in the quarter.

The question is how long this capital will last and under what terms will Nikola raise additional capital. The company has long promoted needing to raise additional capital this year, even after raising $200 million in convertible debts back in Q2. Nikola states it has the capital to meet business plans over the next 12 months, the company also has the goal of having enough capital on hand to meet the next year of production and expansion plans.

The company just got shareholders to approve the authorized shares from 600 million to 800 million. The stock trades below $8 with a $3.5 billion market cap, making an equity raise highly unappealing, but the best option isn’t likely debt. The company would have to issue at least 125 million shares to raise $1 billion.

Nikola still has grand goals, with the plans for the FCEV trucks requiring the building and testing of another line of trucks. On top of that, the company has to build out hydrogen production stations to build out this new concept.

Nikola is definitely on the bleeding edge of both BEVs and fuel cell trucks. The biggest determining factor of a future investment in the stock is when the company has a plan to meet capital requirements in place and a better indication of a stronger order book.

The key investor takeaway is that Nikola becomes increasingly an interesting investment. The company is on the pace to a multi-billion dollar business with a compelling valuation. Once Nikola checks off one of the remaining issues, the stock could finally take off.