Rivian Q2: Everything You Need To Know (NASDAQ:RIVN) 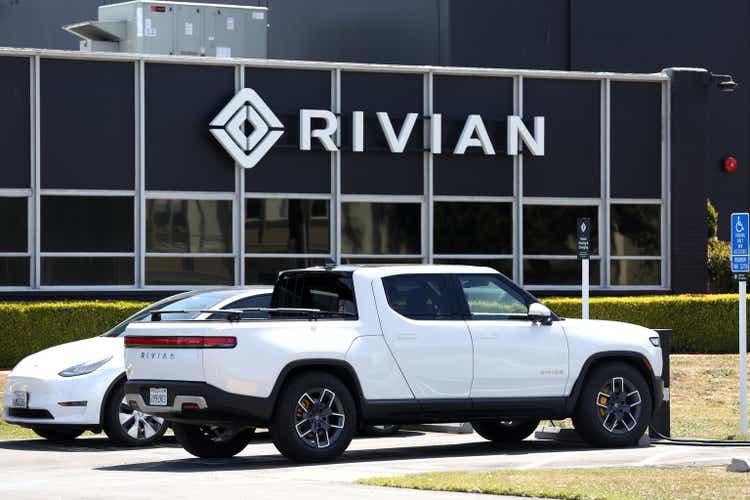 Electric vehicle manufacturer Rivian Automotive (NASDAQ:RIVN) reported much-anticipated earnings for its second fiscal quarter Thursday and the company reported stronger than expected revenues due to a production ramp that is gaining momentum. Unfortunately, due to higher raw material cost and supply chain problems, Rivian now expects much higher EBITDA losses for FY 2022 which means investors will have to wait longer for profits to show up on Rivian’s profit and loss statement. With shares continuing to trade at a very high valuation factor, the risk profile remains unfavorable for Rivian.

Rivian disclosed that it had 98 thousand pre-orders for its electric vehicle products from the US and Canada as of the end of the second-quarter. This means Rivian added 8 thousand new reservations (net, after deliveries and cancellations) since the last reservation update was submitted on May 9. In roughly two months, Rivian’s reservation book increased by 9%. If Rivian’s pre-orders continue to grow at a similar rate for the remainder of the year, the EV company could have 126 thousand reservation for its R1T and R1S on its books by year-end.

Rivian also confirmed its production target of 25 thousand electric vehicles in FY 2022. The production target was lowered from 50 thousand units at the end of February due to supply chain problems which Rivian has said will remain a limiting factor this year. Rivian’s confirmation of its production goal stands in stark contrast to Lucid’s (LCID) downgraded manufacturing forecast. Lucid now expects to have a factory output of just 6-7 thousand electric vehicles, reducing its outlook again by 50%. Lucid’s downgrade of its expected production volume was the reason why I called the company’s Q2 a game-changer for the EV company.

Rivian already said that it produced 4,401 electric vehicles across its R1 and RCV platforms in the second-quarter while 2,553 EVs rolled off its factory belts in the previous quarter. Rivian’s total production growth quarter over quarter was 72%, proving that Rivian is successfully creating scale and ramping up production. The production goal of 25 thousand units implies that Rivian will have to produce 18 thousand units in the second half of the year which I believe is possible.

Rivian’s production ramp remains challenged due to higher raw materials cost and other issues. For those reasons, Rivian now sees an adjusted EBITDA loss of $5.45B for the current year which is about $700M higher than the previous forecast of $4.75B. Rivian also lowered its capex forecast from $2.6B to $2.0B as it expects to shift some expenses into FY 2023. Besides higher costs for basic materials the company said that it is dealing with supply chain challenges and higher freight costs which is weighing on its EBITDA guidance.

Rivian may have problems to source parts and higher costs for raw materials, but the electric vehicle company surely doesn’t have a cash problem. With $14.9B in cash and cash equivalents on its balance sheet, Rivian has the best funded balance sheet in the entire electric vehicle industry. Rivian had cost of revenue and operating expenses of around $1.0B each in Q2’22, meaning the company’s current cash position ensures that the production ramp is fully funded at least until the end of FY 2023… even if the company were to generate zero revenues from product sales.

Rivian currently has a production and delivery setup that translates to $1.5B in (annualized) revenues while Rivian’s market cap is $36B. Investors expect Rivian to generate $6.2B in revenues next year, assuming a flawless ramp regarding production and customer deliveries. Based off of $6.2B in revenues, Rivian has a price-to-revenue ratio of 5.7x. I believe that the valuation is too ambitious considering that supply chain headwinds could throw off Rivian’s production timeline again.

Rivian obviously has production and timeline risks as an electric vehicle start-up and the company may grow its factory output at a slower rate if supply chain challenges get more severe. A recession would likely also cast doubt over Rivian’s production outlook for FY 2023. What I also see as a risk for Rivian is soaring inflation which may weigh on consumers’ willingness to reserve one of Rivian’s electric vehicles. While Rivian doesn’t see a weakening of demand just yet, high inflation combined with stagnating growth prospects may translate to weaker consumer spending and a slower revenue ramp for Rivian.

Rivian confirmed its 25 thousand EV production goal for FY 2022. The biggest surprise was that the company now expects higher EBITDA losses as its ramps manufacturing of the R1T, the R1S and the commercial van solution EDV which is pushing profits further out into the future. Higher costs for raw materials and problems with the supply chain are the two biggest risks for Rivian and, for that reason, I don’t expect big news from the EV start-up regarding production growth in FY 2023. Rivian’s shares continue to be overvalued, even when considering the firm’s delivery and revenue ramp, and the risk profile continues to be skewed to the downside here!