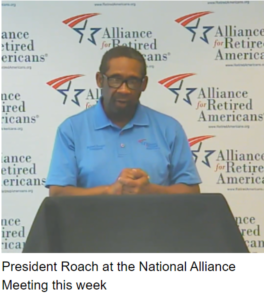 The Alliance’s 2022 National Membership Meeting took place online Wednesday and Thursday, July 27-28. On the first day, Robert Roach, Jr., who has been President of the Alliance since September of 2015, was re-elected to a four-year term.

“I am so proud to lead the Alliance, and even more proud of the work members have done over the last several years,” said President Roach. “Our collective advocacy has ensured that more than ten million Americans will get the pension benefits they earned, and that Social Security and Medicare remain strong. Thank you to everyone who participated and helped make our national meeting a success.”

“I have enjoyed this opportunity thoroughly, and it’s been a privilege to work together to advance the interests of retirees across the country.”

Julie Horwin of Arizona, who was elected Executive Vice President, told participants, “I am honored that you elected me as one of the executive vice presidents…I promise you that working with you, my brothers and sisters, I will do whatever it takes to help continue the work of the Alliance.” She succeeds Jo Etta Brown, who was honored in a special Alliance resolution for her many years of advocacy, service and support to the Alliance.

Wendy Boszak of Nevada was elected to the Community Advocacy Network (CAN) Board. Jean Dobashi (Hawaii) and Gail Dietrich (Nevada) will continue their positions on the national executive board. Ohio Alliance President Norm Wernet was Elections Committee Chair and led the Alliance election proceedings.

Letter to Senators on Reconciliation

My Satisfying Retirement : What I Don’t Do