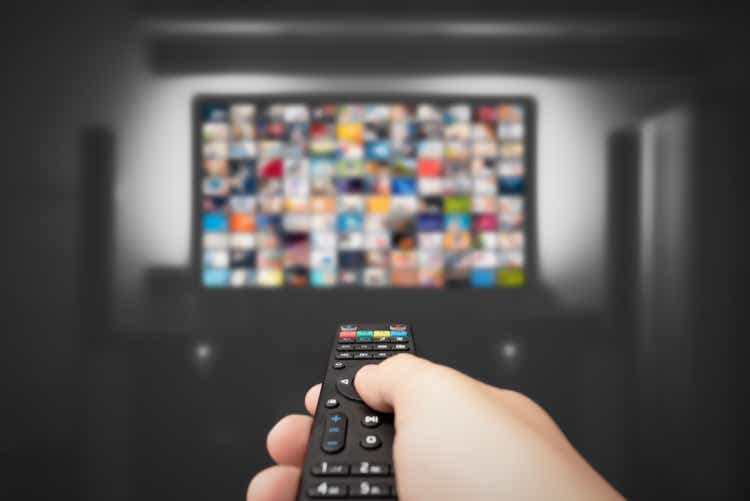 Roku (NASDAQ:ROKU) has hit a rough patch. There was a period when Roku was able to delight investors as it posted sizzling revenue growth rates. But today, as investors are increasingly looking for profitable revenue growth, Roku comes up short.

The stock may appear cheap at 3x forward sales, but with no profitability in sight, I don’t see how investors can now look kindly towards this stock.

Ultimately, there are too many hairs on Roku. And the valuation of this unprofitable company leaves investors with no margin of safety.

The days when Roku was handily beating analysts’ revenue estimates are now long-distance memory, as you can see from the green arrow, above. As Warren Buffett says, there’s never just one cockroach in the kitchen.

The company is now struggling to gain traction, and this stock has become a ”show-me” story, see red arrow.

Most investors reading the above quote will know what this is a reference to. During the Covid period, we were all in awe of these Covid winners. The sky was the limit. And in the crowd, there was a consensus. Yet, both the consensus and I were wrong on Roku.

I believed, wrongly as it turns out, that with Roku down so significantly from its previous highs, it no longer made any sense to be bearish on the stock.

But the market has its way of keeping us humble. I was resolute that as long as Roku’s active accounts kept increasing that the market would look favorably towards Roku.

I was being led by two insights that had worked successfully in the past.

In the first instance, whenever Netflix (NFLX) in the past missed on its revenue line or its EPS line, as long as paid subscribers continued to move higher, the market continued rewarding the stock.

Secondly, I believed that with the stock down so substantially from 2021, surely, investors were already pricing in a lot of negativity.

Well, it turns out that in both instances, I was wrong. Or better said, despite those two conditions being fulfilled, with active accounts increasing by 14% y/y, and the stock down more than 70% in the past year, the market still wanted nothing to do with Roku.

Roku has now lost faith in investors’ eyes. Hence, it will take time for investors to restore this stock to honor.

In the short term, defined as a period of 1 year, the biggest driving force of investors’ return is the stock’s multiple. If the multiple is expanding rapidly, a lot of questions get pushed to the back burner. Everyone becomes a buy-and-hold investor. And life is good.

And the same happens in reverse. When the multiple is rapidly contracting, investors are continuously asking tough questions about their investments. It becomes a show-me story. And life is miserable.

The problem for Roku now lies in the fact that the market is no longer rewarding unprofitable growth companies in the same way as it was.

And then, to further compound issues, Roku isn’t even growing anywhere near what could be defined as a growth story. With mid-single digits revenue growth and no path to profitability in sight, investors are now looking for an exit.

The market is brutal. It does not care what price the investors paid. There’s little point in holding on towards breakeven. The stock will go towards fair value. And then, it will not stop at fair value. It will overshoot. Or in this case, undershoot.

And herein lies the problem with an investment in Roku. Even if the argument could be made that the stock is now fairly valued, there’s so much negative sentiment towards the stock, that it won’t stop at fair value.

It will only stop when all hope has been purged from the stock. And there’s simply no point in getting frustrated about this. When it comes to investing there are going to be winners and losers. And that’s simply how it is. With so many really high-quality stocks available, investors would do well to salvage their capital and move on to better opportunities.