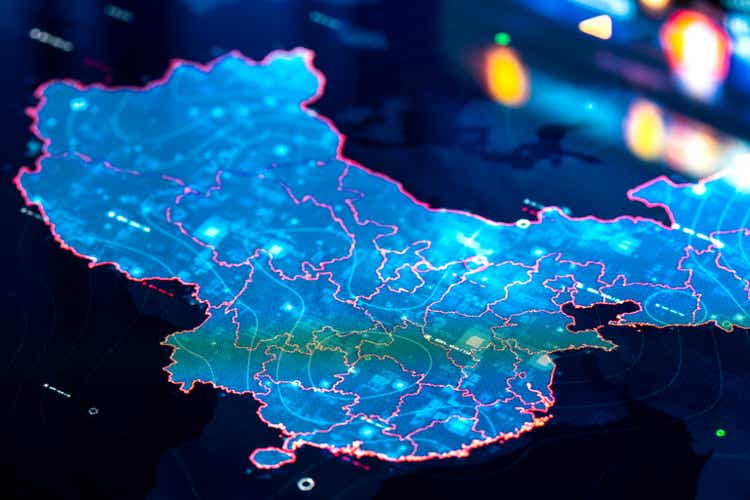 If China had adopted the “herd immunity” policy or a hands-off approach, given its large population, the country would have faced catastrophic consequences”- Xi Jinping

The SPDR S&P China ETF (NYSEARCA:GXC) offers exposure to a large (850 stocks), market-cap weighted portfolio of Chinese domiciled stocks that are available to foreign investors. This year, GXC has proven to be a disappointing source of returns, underperforming both the US markets (SPY) as well as the global markets (VT).

Given this underperformance, some of you may be wondering if the valuation differentials have turned rosy enough to warrant some consideration; well, I can confirm that the valuation backdrop certainly looks a lot more attractive now. Just for some perspective, GXC only trades at 11.34x, a ~31% discount to US markets, and a 16% discount to world markets.

As patrons of The Lead-Lag Report would note, EM-themed products may not be everyone’s cup of tea at the moment, given the ongoing macroeconomic risks, but at least from a valuation angle, they should not be cast aside entirely. For instance, consider that despite a fairly pernicious backdrop, the US small-cap space has largely kept pace with large-caps this year, and I’d like to believe they’ve been able to attract funds primarily due to the low valuations on offer.

Whilst the valuation angle of GXC looks compelling, what about some of the other considerations? Well, read on to find out.

With regards to the product’s innate structure, I have to admit that some of its features come across as sub-par when juxtaposed against other options in this space. From a cost angle, note that the likes of FLCH, CXSE, and CN are available at much lower expense ratios within a range of 0.19%-0.5% (GXC’s corresponding figure is 0.59%). Then, whilst GXC’s current yield of a little over 2% would suggest that it is an opportune time to get in (typically yields in this counter have only averaged around 1.6% over the last 4 years), investors should also note that the likes of FLCH and CN offer current yields that are around 50bps superior (within the 2.5% range).

The other important narrative to consider is that this ETF is dominated by stocks belonging to the cyclical consumer discretionary sector. I do wonder if we will ever see this sector get back to the dynamics that were in place before the ongoing zero-covid policy; I suspect that would be wishful thinking, as it looks like the administration there feels that the political risks of loosening things up are far greater than the benefits.

All in all, it is fair to say that the zero-covid policy in China is likely to be an omnipresent phenomenon that could extend for years at a stretch. That, of course, is bad news for the country’s growth prospects. The Chinese administration has pegged FY22 GDP growth prospects at unrealistic levels of 5.5%; after having only grown at 2.5% in H1, that would call for an overly ambitious performance of 8.5% in H2. Already data from the first month of H2 show that things are falling apart, and it looks like the consumer discretionary sector is the one taking it on the chin. A recent survey by CBBI showed that revenues have declined for the fourth straight month, and retailers have even been slow to hire. What’s particularly worrying is that a lot of these retailers are struggling to stay afloat; to compound the issue, retail-based borrowings have also spiked up in July, and these loans are being availed at a premium. If occupancy levels and consumer confidence remains sub-par, I worry about the debt-servicing capabilities of the discretionary sector, and the capacity for this to snowball into something larger.

To arrest weakness here, some believe that the administration would counter with additional stimulus measures, but reports there suggest that is unlikely to be the case this time. In fact what you’re likely to see is more investment-type measures, the effects of which could take longer to play out.

As noted in a discussion yesterday with Michael Pettis on Lead-Lag Live, these recent Taiwan-based geo-political tensions could put a spanner in the works of the relief rally we’ve witnessed in global stocks over the past few weeks; China, being the epicenter of it all, makes investing here all the more daunting. You may be looking at even further supply chain disruptions and sanctions of varying degrees. Under conditions such as this, it also doesn’t help that GXC has an annualized elevated volatility profile of 35.37%, which is almost twice as much as the typical ETF median. Despite the attractive valuation angle, I would urge some caution for those looking to enter or load up on GXC.

Sometimes, you might not realize your biggest portfolio risks until it’s too late.

That’s why it’s important to pay attention to the right market data, analysis, and insights on a daily basis. Being a passive investor puts you at unnecessary risk. When you stay informed on key signals and indicators, you’ll take control of your financial future.

My award-winning market research gives you everything you need to know each day, so you can be ready to act when it matters most.