Subaru: Do Not See A Case For Upside At This Time (OTCMKTS:FUJHY) 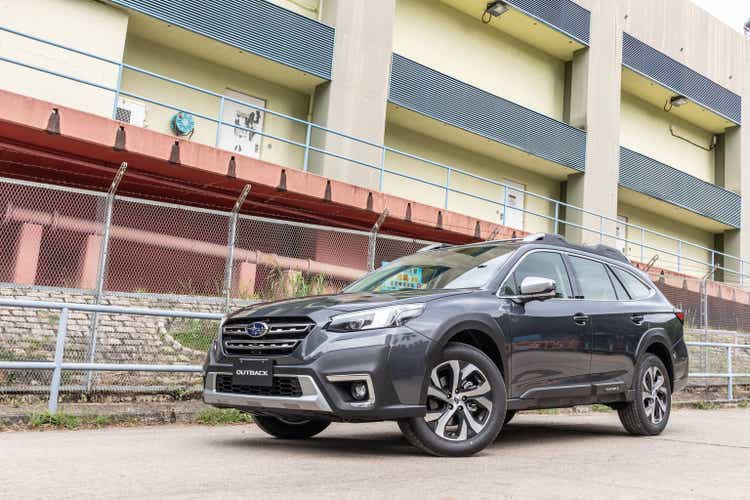 Investment Thesis: I fail to see a case for Subaru upside at this time, given the stock’s high P/E ratio and low sales growth.

Subaru Corporation (OTCPK:FUJHY, OTCPK:FUJHF) is a leading Japanese automaker which traditionally caters to a more niche customer base than some of its other competitors – with the company’s engine and drivetrain and sports car offerings being particular selling points.

Over the past five years, we have seen the stock take a significant decline:

The purpose of this article is to determine whether Subaru is now trading at an attractive price point and whether investors could potentially see a significant upside from here.

When looking at the company’s cash performance over the last year, we can see that the quick ratio for Subaru has declined.

We can see that current liabilities have declined over the period, while inventories rose and cash levels fell.

According to the company’s most recent financial report, Subaru was significantly affected by the spread of COVID-19 in Southeast Asia over the second quarter – which resulted in shortages of parts normally procured from business partners in the region. Additionally, the global semiconductor shortage also led to production delays.

We can see that production across the Japanese market decreased significantly as compared to last year:

These factors may have contributed to an increase in inventories and a corresponding decrease in cash – the company was not able to sell some vehicles due to production delays which resulted in greater inventory. Additionally, ongoing inflationary concerns and uncertainty regarding the Russia-Ukraine situation are also cited as contributing factors.

Year-on-year, the company saw a decrease of 3% in sales to 2,744.5 billion yen. However, we do see that while the company showed a loss in revenue and operating profit in the most recent quarter – it has reduced significantly from that of the previous year.

With that being said, when we look at the 10-year P/E ratio for Subaru – we can see that the ratio is near a 10-year-high while earnings per share has seen a downward trend:

This would indicate that even with the stock having seen significant declines – Subaru is still indicated to be expensive on a price-to-earnings basis.

With supply chain concerns impacting sales and the stock still expensive on a price-to-earnings basis, it is hard to make a case for an upside in the stock at this time.

When comparing sales by geography, we can see that Subaru has become more dependent on the U.S. market. While U.S. sales accounted for 62% of total sales in 2017 – this had increased to 68% in 2022.

As such, performance across the U.S. market will be increasingly critical for Subaru’s overall success going forward. That said, with rising energy prices and a stronger dollar – the production costs associated with serving this market are likely to increase going forward.

Moreover, with over 5% of vehicles in the United States now powered solely by electricity, competition in the EV space is set to grow significantly. However, while Subaru is ramping up its capabilities in this regard – the company still faces strong competition from established U.S. companies such as Tesla (TSLA) and Ford Motor Company (F).

Subaru aims to have hybrid electric vehicle (“HEV”) and battery electric vehicle (“BEV”) vehicles account for over 40% of global sales by 2030. However, I take the view that the company might have to bolster domestic production in order to capture a significant segment of this market – competition in the United States is likely to prove too great. As such, Subaru will likely need to reduce overall dependency on U.S. sales to be able to sustain growth.

To conclude, while Subaru is facing challenges like many other firms in the automotive industry – I fail to see a case for upside at this time given the stock’s high P/E ratio and low sales growth.