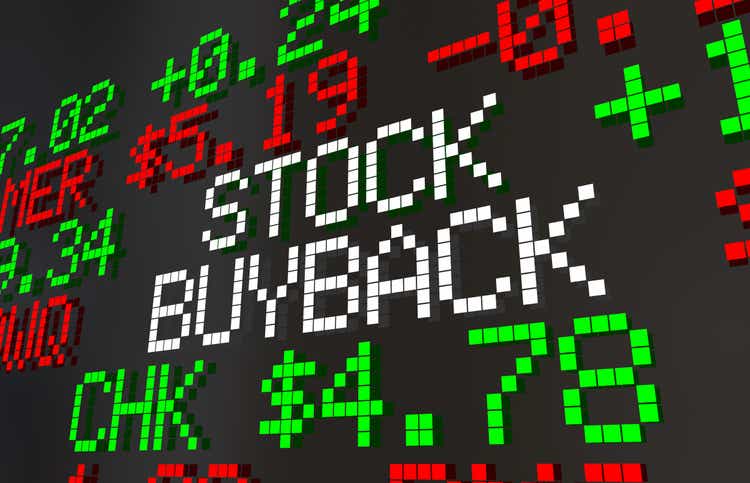 When companies have extra cash, they may pay dividends to shareholders, perform stock buybacks (also called share repurchases), invest the money back into the company, or a combination of the three, which is generally the case.

Companies often choose buybacks over dividends because there are several advantages.

1. The company increases its earnings-per-share ((EPS)) by reducing the number of shares outstanding.

This also lowers the price-to-earnings (P/E) ratio, which usually drives up the stock price. In short: it makes the company’s results look marvelous and gives us, the investors, a bigger piece of the pie.

Corporations shield investors from this tax by using extra cash for buybacks instead of dividends. This way, investors won’t have a taxable event until they sell the shares.

There are other ancillary benefits but let’s not get completely bogged down in weeds.

What is the new excise tax on stock buybacks?

This has left some companies with hoards of cash and caused stock buybacks to explode – something cheered by shareholders and not looked upon fondly by some people and politicians. Total buybacks in 2021 were around $850 billion.

With Apple (NASDAQ:AAPL) leading the way.

The new tax appears pretty simple – a 1% excise on the value of share repurchases to be paid for by the company.

How will the new tax affect Apple and its shareholders?

Apple buys back its stock at an incredible pace. Buybacks will total nearly $385 billion over the last five fiscal years once 2022 is in the books, as shown below.

The stock’s price has soared as the outstanding shares have shrunk considerably, as shown below.

The new tax would cost Apple about $860 million annually at the current pace of buybacks.

Apple stock currently trades at 30.7 times fiscal 2021 EPS. Applying the same ratio to the lower EPS figure would theoretically drop the share price by about $1.50 – hardly a market-moving figure.

Of course, it’s not that simple. Many other ratios that investors use to value stocks won’t be affected at all, so the stock price is not destined to fall a specific amount.

What options does Apple have?

Apple has several maneuvers it can make.

First, companies will likely significantly accelerate buybacks through the end of 2022 because the tax won’t take effect until 2023.

Next, many have suggested that companies simply repurchase 99% of the planned amount and use the 1% saved to pay the tax. This is a terrific plan if cash flow is the chief concern. But it will still hurt net income and EPS slightly.

Apple could also choose to increase the dividend and lower buybacks. This will lower the company’s tax burden. But it has two significant drawbacks. First, the share count won’t shrink as quickly, so EPS will still be affected. Second, it essentially shifts the tax burden to shareholders. This is exacerbated because many shareholders will pay 15% tax on these dividends – well above the 1% excise tax rate.

So what’s the bottom line?

It boils down to determining the most advantageous way to reward shareholders with billions of dollars of free cash flow – what an excellent problem to have!

The tax will probably have a trivial adverse effect on shareholders of companies who spend tremendous amounts of money on buybacks. On the other hand, the corporate tax rate is still the lowest in many decades, and stocks continue to be premium vehicles for wealth accumulation.

The best path forward for Apple is to continue business as usual and foot the 1% tax for shareholders.