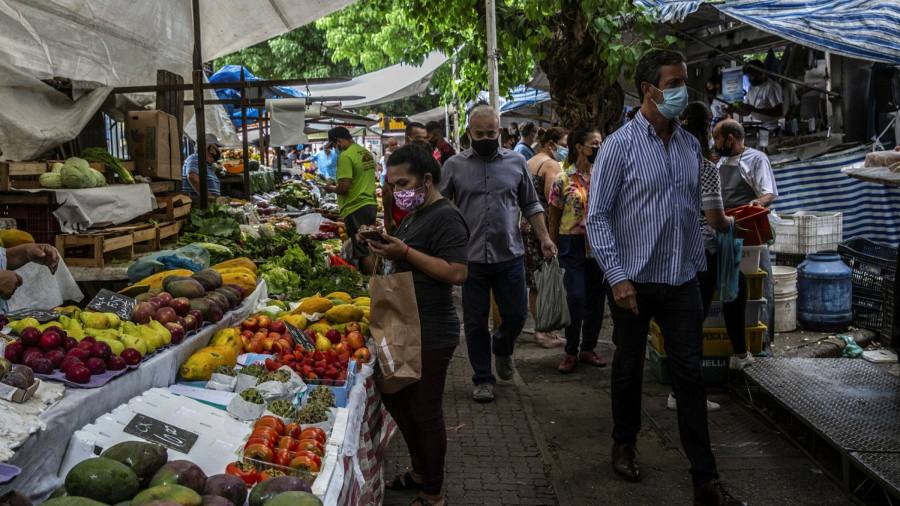 Isabel da Costa, a restaurant manager in São Paulo, is conflicted about the state of the Brazilian economy. On one hand, she says she sees a strong bounceback from the coronavirus pandemic, with new bars and businesses popping up across the city.

On the other, she says, soaring levels of inflation have undercut any sense that life is improving for the average citizen: “People are coming back. New bars and restaurants are opening and the public is starting to consume again. But inflation is a huge problem. Everything is too expensive.”

As the country gears up for elections in October, the economy is dominating the national debate. In surveys, voters have repeatedly ranked economic issues as the most important, above crime and corruption, which figured prominently in previous elections. Rightwing president Jair Bolsonaro will be hoping that recent economic data will boost his chances, say analysts.

Driven by a strong rebound in the services sector, Brazil’s economy is now forecast to grow by 1.7 per cent this year, a substantial improvement from as recently as January when prominent banks predicted a recession.

Spurred by the full reopening following Covid-19 restrictions, unemployment has fallen below double digits for the first time since January 2016, and services sector activity has reached its highest level since 2015, according to government data.

Yet at 11.4 per cent annually, inflation remains high. Despite largely successful government efforts to tamp down the cost of fuel through tax cuts, food prices have also continued to rise, hurting the tens of millions of poor Brazilians who struggle to put food on the table. The price of carrots and potatoes has risen about 70 per cent, while milk has increased more than 30 per cent in the past 12 months.

According to da Costa: “When you add in gas, electricity, rent, everything you need to have for a business, it ends up being very difficult.”

Bolsonaro has recognised the importance of giving citizens a boost. Last month, his government passed a BRL41bn ($7.7bn) spending package, which will increase monthly cash payments to Brazil’s poorest by 50 per cent to 600 reais until the end of the year, in addition to creating fuel subsidies for truck and taxi drivers.

But the president still faces an uphill battle to win re-election. A study from Datafolha showed him trailing his main rival, leftwing former leader Luiz Inácio Lula da Silva, by 18 percentage points. Other polls in recent weeks showed the former army captain appearing to narrow the gap to less than 10 percentage points.

“It is a fact that a country that is doing well economically tends to re-elect its presidents. The recent economic indicators can help Bolsonaro, but it’s hard to say whether they will be enough to change enough minds to give him a victory,” said Felipe Nunes, founder of pollster Quaest.

Elected in 2018 as a populist outsider, Bolsonaro’s first term was pockmarked by controversy, notably his perceived mishandling of the pandemic. His rejection rate is 53 per cent among voters.

Armando Castelar, an economist at the Brazilian Institute of Economics, believes the improving economy and government spending package will make “the election more disputed than polls suggest”.

“The economy in 2022 is shaping to be better than feared. The unemployment rate is falling surprisingly fast and a lot of this has to do with the recovery of services, which has been the last sector to recover after the pandemic,” he said.

Service sector activity — which accounts for more than 60 per cent of gross domestic product — expanded by 9.4 per cent this year up to May, fuelled by a rebound in transport, tourism and restaurants, according to official government statistics.

Brazil also received a boost from high commodity prices as a result of the war in Ukraine, while tightening monetary policy weighed less on growth than expected, Castelar added.

Overall inflation appears to have peaked, although the continued rise in food prices means poorer Brazilians have yet to feel the effects, said Vale.

The brighter outlook for Latin America’s largest economy will vindicate finance minister Paulo Guedes, who last year dismissed forecasts of a recession by local banks and predicted Brazil would grow 2.1 per cent this year.

“Of course [the banks] are wrong. Either they are wrong or they are militant politically. They are trying to affect the election,” Guedes told the Financial Times in November last year.

“It is more likely that Brazil has some growth and resilient inflation [in 2022] than lower inflation and no growth,” he said at the time.

Camila Abdelmalack, an economist with Veedha Investimentos, pointed to effective government efforts to stimulate growth — including allowing employees to withdraw cash from a mandatory redundancy fund — even before the recent spending package was passed.

“These policies gave a boost to the population’s income and will help to produce some economic growth,” she said.

For Paulo Alberto Seibel, a 58-year-old businessman who runs a booming brick factory in the interior of coastal state Espírito Santo, Bolsonaro deserves credit for the improving economy.

“They say that the country isn’t growing,” he said. “Well, we can’t manufacture enough.”

Despite being a diehard supporter of the president, however, he cannot ignore the pinch from inflation: “If diesel was a bit cheaper, things would be even better still.”