EUFN ETF: For A European ETF, It Has A Lot Of HSBC (NASDAQ:EUFN) 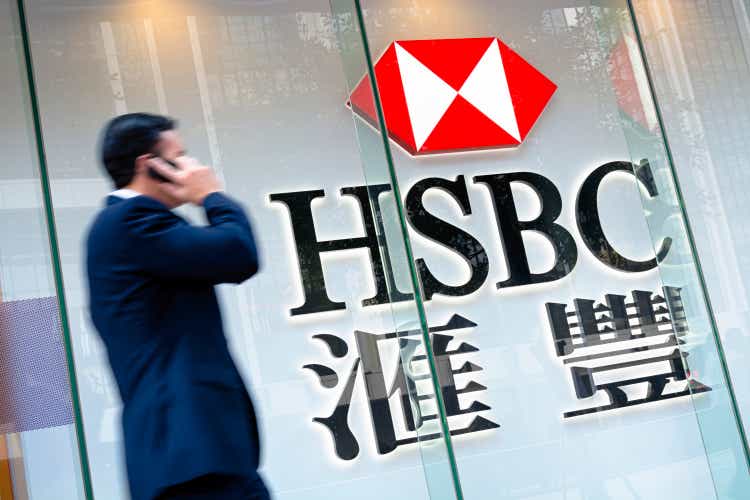 The iShares MSCI Europe Financials Sector Index ETF (NASDAQ:EUFN) is a bit of a misnomer. Yes, it has a lot of European financials, and we even like European financials right now. But the problem is that it also has a lot of HSBC (HSBC) which we’d strongly pass on and ETF investors should too. While there are people who know the situation better than I do, and may want to take that knowledge and apply it directly to HSBC, for ETF investors who are looking for a broader, casual exposure, HSBC is not what you want to see. It’s not even remotely European. With an overexposure to that stock, we pass on the whole ETF.

The EUFN breakdown goes a little like this: 10% is allocated to HSBC, and below it is another 25% allocated nicely across the best European insurance and banking companies. Starting with the positives, Allianz (OTCPK:ALIZF) benefits from its substantial asset management franchise with Pimco, which generally goes overlooked. Moreover, it provides a well-covered dividend. Zurich Insurance (OTCQX:ZURVY) is one of the more solid European insurers and benefits similarly from its P&C model, with the cash generative profile that comes with it, as well as a favorable situation in terms of investment yield through its regulatory asset portfolio against claims allocated substantially to rising rate and low risk rollovers in fixed income. UBS AG (UBS) has its own excellent franchises in wealth management, solid exposures in markets that can benefit from volatility and a broadly solid profile. On the retail side they benefit from improving net interest margins, also exposed positively to the rising rate environment. BNP Paribas (OTCQX:BNPQF), AXA (OTCQX:AXAHY) and the rest of the exposures similarly benefit from growing rates and a large current base of loans and policies on which to earn cash where cash is becoming more expensive. Dividends across the portfolio, as well as multiples, are highly attractive at a 7% trailing yield and a 7.8x PE, meaning a well-covered headstart on returns where capital appreciation is likely to be limited over the next 6-12 months.

The problem is the HSBC exposure, which accounts for 10% of the portfolio. They are meaningfully exposed to China, which dominates the bank’s 70% profit exposure to Asia. HSBC is not a quintessential European exposure, and it’s strange that it would ever be considered as such from the outset, where ‘Shanghai’ is in its name.

The problem with HSBC is that investors might still be invested in the stock under the belief that China will not force the bank to breakup. HSBC is a remnant of a western regime that once ruled over Hong Kong, and the notion that China will not stamp out any remaining western influence in HK is misguided, especially in the current geopolitical environment that has reminded us how easily cooperation can fall apart. In the very probable eventuality that the bank will breakup (in our opinion a matter of if not when), restructuring costs will decimate bottom lines. The dividend will collapse, and so will the profits. Being a major banking conglomerate, these restructurings are likely to last for years, maybe trailing on meaningfully for a decade. The potential for capital impairment is significant.

With HSBC being a key institution with the power to determine the fortunes in a major slice of the Chinese economy, its Chinese franchise is doomed to be separated out of the rest of the business. It will be a mess, and we are not interested in an ETF that is so heavily allocated towards it. This is the only impeaching thing for the EUFN, but it is more than enough for us to lose any interest in this ETF. While the story of HSBC might be interesting to special situation investors, ETF investors should take into account these factors as they may want to avoid exposure to it. With the same PE as ING (ING), where ING does not have these risks, you’d wish that they would at least replace HSBC at the top of the holdings list.

While we don’t often do macroeconomic opinions, we do occasionally on our marketplace service here on Seeking Alpha, The Value Lab. We focus on long-only value ideas, where we try to find international mispriced equities and target a portfolio yield of about 4%. We’ve done really well for ourselves over the last 5 years, but it took getting our hands dirty in international markets. If you are a value-investor, serious about protecting your wealth, us at the Value Lab might be of inspiration. Give our no-strings-attached free trial a try to see if it’s for you.