Bolsonaro kicks off re-election bid with pitch to conservative Brazilians 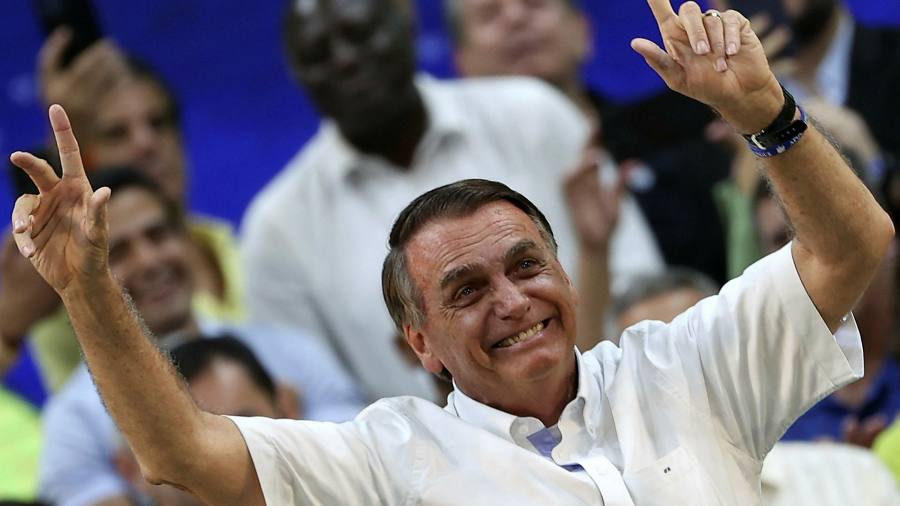 In front of thousands of supporters clad in the green and yellow of the Brazilian flag, the far-right leader took to the stage in Rio de Janeiro espousing his belief in God, family and liberty.

“Today we have a president who believes in God; represents the military and police; believes in the family,” said Bolsonaro, who was repeatedly interrupted by cheers of mito — legend — from his often emotional fans.

Despite the warm welcome in Rio, Bolsonaro faces an uphill battle ahead of the election in October. Many polls put him between 10 and 15 percentage points behind his main rival for the president, leftwing former leader Luiz Inácio Lula da Silva, although the gap appears to be narrowing.

While the event on Sunday formalised his candidacy for the Liberal party, Bolsonaro has been in campaign mode for weeks. Earlier this month, he succeeded in passing a spending package through Congress that will increase monthly cash handouts to Brazil’s poorest by 50 per cent until the end of the year.

The move was widely viewed as an attempt to mop up support in the country’s poor north-east region, which is home to 40 per cent of voters, the vast majority of whom support Lula.

On Sunday, Bolsonaro told the crowd that the increased payments of 600 reais ($110) would continue into next year.

“We are changing Brazil for real and we are not leaving anyone behind,” said Bolsonaro, who was elected in 2018 as a populist outsider who promised to clean up Brazil after a years-long corruption scandal.

Bolsonaro also used the event to focus on women voters — a demographic in which he trails Lula by as many as 25 percentage points. Many women dislike his overt machismo and often misogynistic language. He famously once said: “I have five children. Four are men and then, in a moment of weakness, the fifth came out a girl.”

After taking the stage, Bolsonaro quickly handed the microphone to his wife, Michelle, who extolled at length her husband’s respect for women, claiming he sanctioned more laws protecting women than any other Brazilian president.

She also focused on the importance of God in a message aimed at Brazil’s increasingly powerful evangelical community.

The country’s last census was conducted in 2010, but studies suggest more than 30 per cent of Brazilians are now evangelical and the community — which often takes a hard line on issues such as abortion and gay marriage — is growing rapidly.

Thomas Traumann, a political analyst based in Rio, said this focus on conservative values — rather than building a big tent coalition — will probably be the hallmark of the president’s re-election campaign.

A former army captain known for his often pugnacious language, Bolsonaro on Sunday largely restrained his attacks on Lula, claiming only that the leftwing leader threatened Brazilians’ liberty with plans to regulate social and traditional media.

He also avoided further criticism of Brazil’s electronic voting system, which he has repeatedly claimed, without evidence, is rigged. The White House was last week prompted into expressing its public support for Brazil’s electoral system after Bolsonaro repeated the rigging claims to a group of foreign ambassadors.

Critics fear he is laying the groundwork for contesting the election should he lose.

Janette Mota, a nurse from Rio de Janeiro, said she came to the event out of respect for her country: “The left is always destroying countries — look at Chile and Argentina. Bolsonaro represents liberty, faith and the goodness of Brazil.”

Werli Ferreira, a 75-year-old native from the interior of the state of Rio de Janeiro, said she left home at 4am to come to the launch event because she loves the president.

“He has rescued our pride in Brazil. He has lifted our country up.”