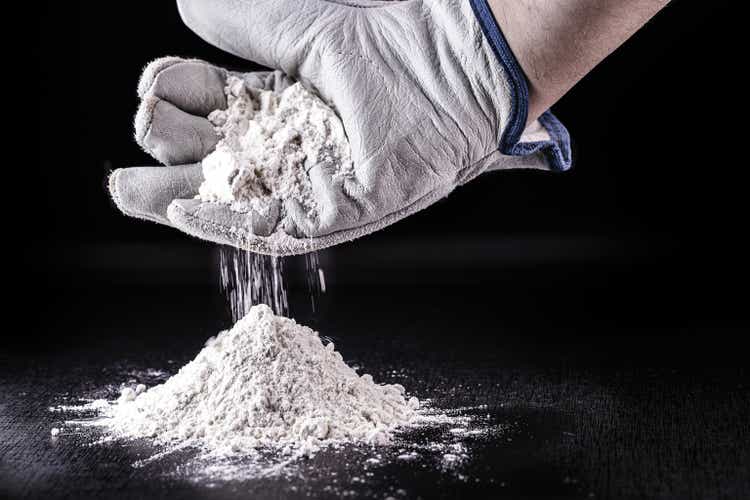 Kronos Worldwide, Inc. (NYSE:KRO) is a chemical company that specializes in titanium dioxide pigments. These pigments are used in various plastics, paint, coatings, paper, cosmetics, and more. They are an 80% owned subsidiary of VHI. VHI itself is a subsidiary of the private holding company Contran Corp. It’s been publicly traded since 2003 and has been a very cyclical stock.

We can see right off the bat that the opportunity is not in buying this stock for the long run, but in timing the cycles as best as you can.

They are a top 5 producer of TiO2, with competitors shown below.

Their specialty, TIO2, isn’t traded in the commodity markets, yet pricing in the TiO2 market is traditionally volatile. This is reflected in the gross margins, which never remain too consistent. Below are all margins for the past 10 years.

There is only one year of negative free cash flow, but free cash flow in general has been volatile and definitely has not grown over time. I don’t mind seeing net income fluctuate a bit but if free cash flow is inconsistent over the long run then it’s a red flag for me.

Below are return on capital metrics:

KRO diluted in 2010 and 2011, but hasn’t altered share count since then. Dividends have been paid most years, and the trend has been upwards. They’ve made no acquisitions as a public company. There aren’t any major issues with capital allocation, the dividend has been suspended twice due to downturns.

The fundamentals are simply not stable for this business. Margins, returns on capital, and revenue are all volatile and not predictable long term. The dividend isn’t at any immediate risk of being cut, but the underlying cash flows are still too cyclical to expect comparatively stable dividends. Debt levels don’t pose a threat to the dividend; however, they have shown periods of asserted debt repayment in the past and they are sitting on $350 million in cash. The quick ratio is 2.9 and current ratio is 4.5.

The biggest risks comes from unnecessarily riding out each cyclical move this stock will present you, or attempting to time the cycle and getting it wrong. As stated earlier, this is not a long-term compounder. This company is low-margin and in an industry with second-rate growth.

At the end of the day, there is no special sauce that KRO has to take meaningful market share from competitors or expand margins beyond those caused by commodity prices rising. Despite legitimate efforts to provide the best customer service experience, there is still essentially nothing stopping competition. This means KRO has basically no moat and shouldn’t deserve such a high multiple, especially since free cash flow has been volatile while always positive.

This stock is most appropriate for speculators looking to time this particular commodity’s cycle. It has paid off in the past, but for the longer-term investor, there’s no need to participate with so many other options available. This simply isn’t a company that can compound its intrinsic value.

KRO is the definition of a cyclical company, best displayed by the performance of the stock. For those who got the timing right, speculative returns were available in a short time frame. This is the only way to generate alpha with this stock, and playing that game requires a different skill set than those who prefer long-term investing like I do.

The 4% yield might attract some investors initially, but the underlying business is far too volatile for anyone looking to hold for the long run. I wouldn’t call this a dividend trap, but I do think current multiples are too high for the quality of the underlying business. Don’t buy this stock unless you feel you can get in at the right part of the cycle. This is not a buy and hold stock to be sure.