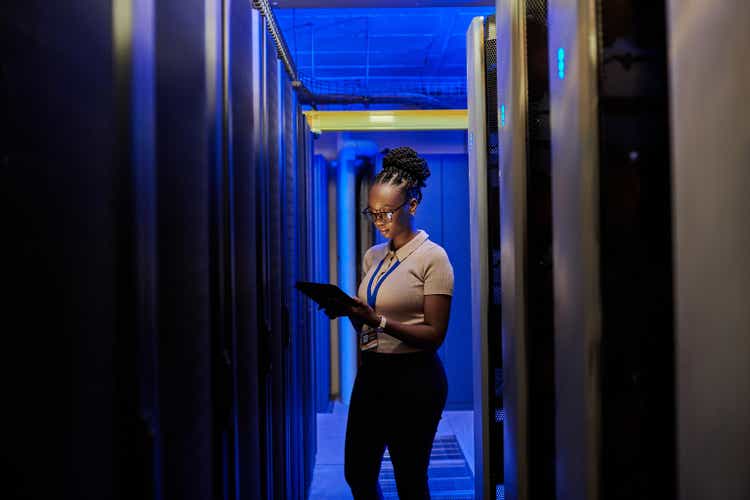 We are initiating coverage on Kyndryl (NYSE:KD) as we believe Kyndryl could provide an interesting investment proposition based on its focus on cloud services and strong partnerships with large enterprises. The company recently spun-off from IBM (NYSE:IBM) last year, and engages in providing cloud services to businesses. However, as of the time of this writing, the company is currently not profitable and revenue growth has declined year-over-year. The stock performance this year has also been abysmal even when compared to the broader index, and currently, the stock price stands near all-time lows. We believe that investors should wait until the company has shown a return to revenue growth before taking a position on this stock.

Q1 results have been disappointing to many investors, as the company reported declining year-over-year revenue and another quarter of losses. The company also guided FY 2023 revenue guidance of $16.3 billion to $16.5 billion which presents a 3%-4% decline year-over-year. Kyndryl’s revenue has also declined on a quarter-over-quarter basis as well. The company’s management remained upbeat on the “medium-term” outlook, but the declining revenue results in an environment where other cloud players are thriving should give pause to investors. Still, there were some positive aspects of the earnings announcement, such as the $1.9 billion cash on hand and access to $5.0 billion in liquidity that should provide a long run way for the company to execute on its business turnaround strategy.

Despite these subpar results, Kyndryl has been able to continue expanding its partnerships with leading enterprises, and continues to be a leader in a market that is expanding substantially. As seen blow, Kyndryl has partnered with top companies in the technology industry that can utilize its cloud offerings. Companies include Microsoft, AWS, Cloudera, and as of this quarter, the company also announced additional partnerships with big enterprise players like Oracle, Cisco, and Five9. Partnerships with technology giants will allow Kyndryl to maintain its industry position while helping its brand recognition after the IBM spin-off.

In addition, after the spin-off, Kyndryl expects its TAM (Total Addressable Market) to more than double compared to before spin-off, and expects the market to grow to $510 billion by 2024. We believe that if Kyndryl successfully executes its strategy, and returns to a path of revenue growth and profitability, the company will be well-poised to benefit significantly from the expansion of the TAM.

Kyndryl has clear goals outlined in the “medium-term” that centers on a return to revenue growth and expansion in EBITDA margins. We believe that these strategic goals are achievable targets, but it remains unclear how the company will exactly achieve these targets. As a result, we believe that the company needs to start to report year-over-year revenue growth at the very least to lend confidence that the management is successfully executing on its medium-term plan.

Furthermore, Kyndryl operates in an industry with increasing competition from big technology companies which has the potential to offset any increase in the size of the market. As a company that is going through business transformation after the spin-off, the company may see increased execution risk that can allow other competitors to expand its market share. Nevertheless, if the company is able to return back to revenue growth, we believe that it would be a good indication that management is successfully carrying its strategic goals, and the business should be more investable from our point of view.

As a valuation exercise, we assess Kyndryl’s potential valuation based on the medium-term strategic outlook of the business. Currently, Kyndryl guides that the revenue outlook for the remainder of the Fiscal Year would hover between $16.3 billion to $16.5 billion. Taking the midpoint of this guidance, we use the revenue guidance of $16.4 billion as the baseline. If management is able to achieve the “High-teens EBITDA” margin of ~18%, that would equate the company EBITDA of $2.95 billion. The EBITDA would already be higher than the current market capitalization of the company, and a 2x – 3x P/EBITDA multiple would already put the valuation at more than double the current levels. Such exercise shows the potential of stockholder price appreciation over the medium-term if the company is able to successfully execute on its strategy.

We are initiating coverage of Kyndryl as we believe that the company’s stock may offer potential outsized risk/reward proposition for investors. However, we believe that it would be better for investors to wait until Kyndryl shows better proof that management is indeed succeeding in the execution of its business strategy, and we believe that a return to revenue growth would be a solid evidence that Kyndryl can successfully turn around the business and become a force in the cloud industry. As a result, we will keep an eye out on Kyndryl, and will update investors depending on the financial results of the next couple of quarters.