No One Can Hide! My Process Revealed. 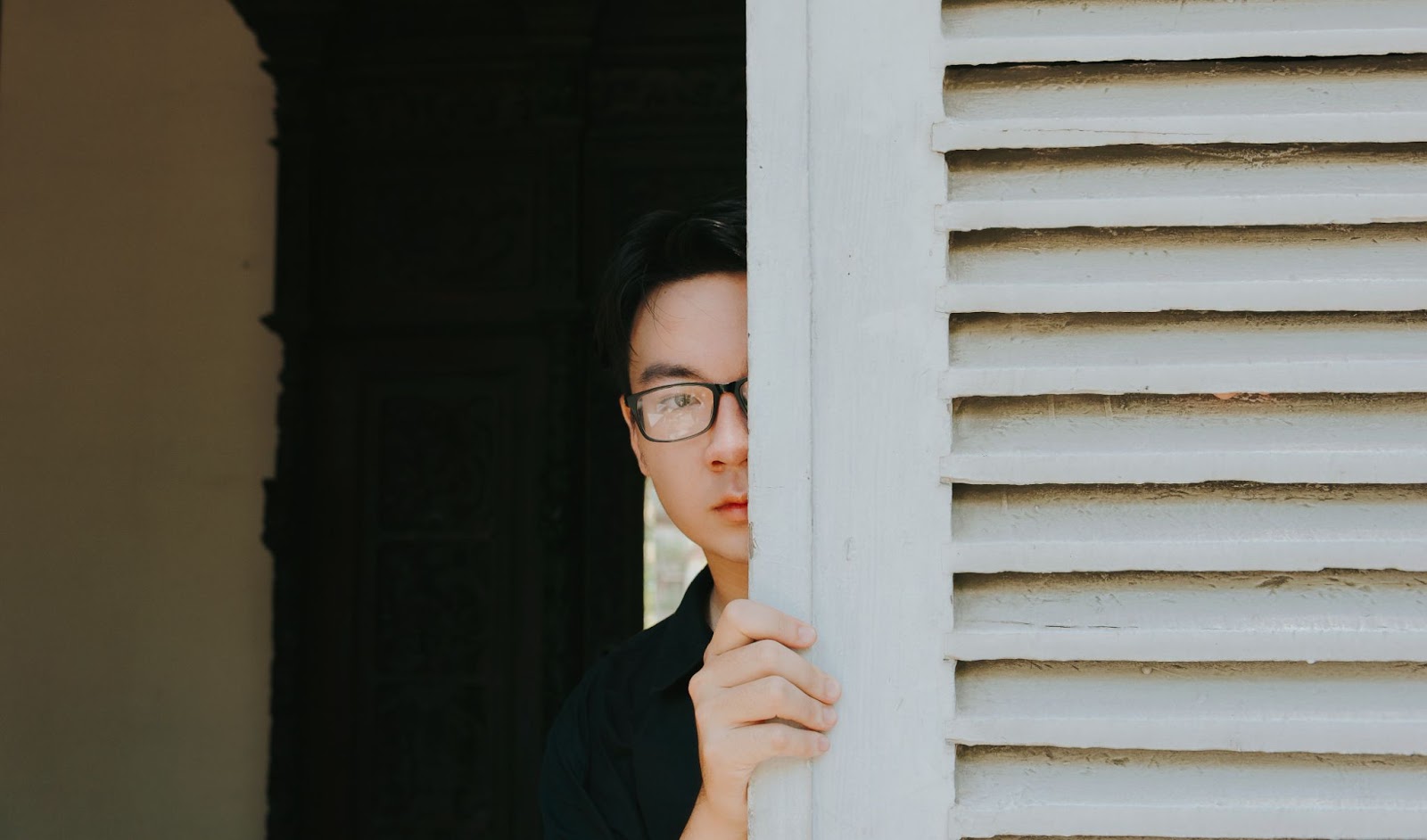 I gotta tell ya, I’m like a kid in a candy store in this market!

With so many stocks catching and holding on to momentum of late, nothing can pull me away from my screens.

That is, of course, except for these special people:

Now, I was recently talking with the cofounder of RagingBull, Jason Bond, and he told me something that made me feel really good.

He told me that the folks over in the 360 Wall Street room were LOVING how I walk them through my process, which ultimately leads to high conviction trade ideas EVERY TRADING DAY.

Now, some of my exclusive Dark Pool Picks members may be upset at me for what I am about to reveal to you, but I also think they’d appreciate that there once was a time when they too had not yet realized the power of this service.

Just yesterday, I saw GDRX come across my Dark Pool scanner with 5.5 MILLION shares traded at $7.

Friends, that’s A LOT of volume, and the fact that it was captured by my Dark Pool Scanner means someone’s trying to hide something.

With my interest now peaked, I then look at the sector in which GDRX trades, which is healthcare.

Healthcare? Now I am really excited because I know that healthcare tends to do well when the market starts to struggle a bit.

Here’s what I mean…

I know we’re not there yet, but the major stock market averages have become extended, so I at least want to start adding some relatively defensive plays to my portfolio in case a correction starts soon.

When I look at this chart of the healthcare sector relative to the S&P 500 ETF (SPY), I see that during the recent market downturn healthcare outperformed the S&P 500.

Because of this leadership by healthcare stocks during market turbulence, I know that I want to possibly get long GDRX as it appears to be rising up from a price base of late. 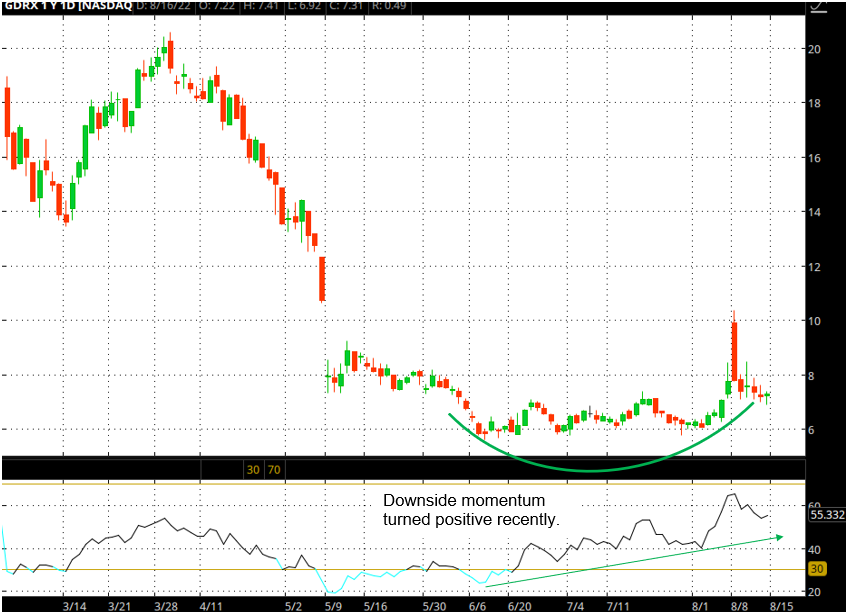 Notice I said “get long” as opposed to “buy” in the sentence above.

That’s because the next step in my process is to look at the level of volatility in the stock.  Specifically, the implied volatility.

And when I do I see that implied volatility is quite high for GDRX right now. 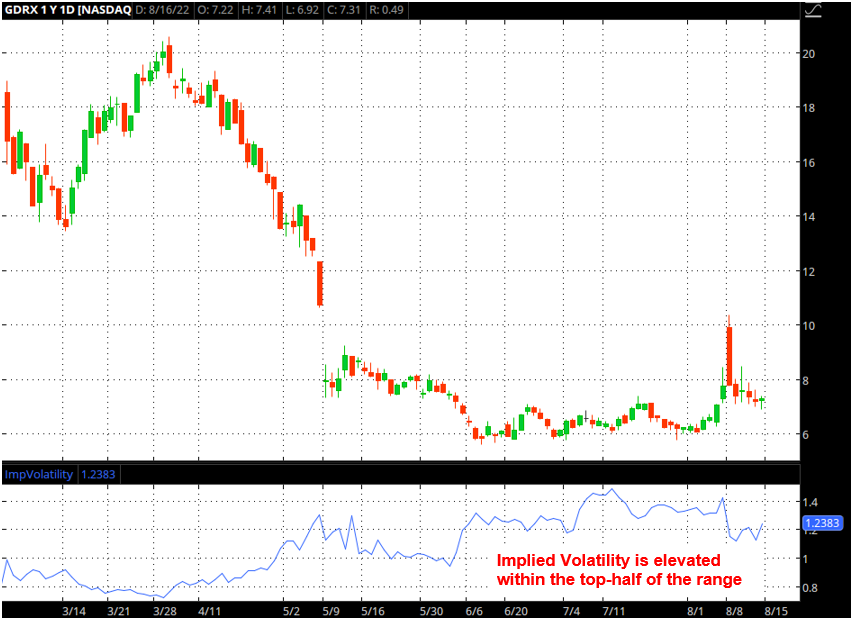 What that tells me is that I should not be so quick to blindly buy GDRX calls.

If I buy calls and the stock does not move quickly enough to the upside, the elevated premium that I am likely to pay for the call options because of this high volatility is probably going to collapse due to theta (time) decay.

Instead, I might want to bet on prices moving higher while at the same time benefiting from theta decay.

And to do that, I want to consider selling a put spread, also known as a “bull put spread.”

Now, folks, I have provided an educational section on how selling put spreads work and why you would want to use a bull put spread below.

In the meantime, the best way for you to get a jump on ideas like this TODAY is to simply enter the 360 Wall Street Room before I go on at 3 pm ET to perform a LIVE education session. 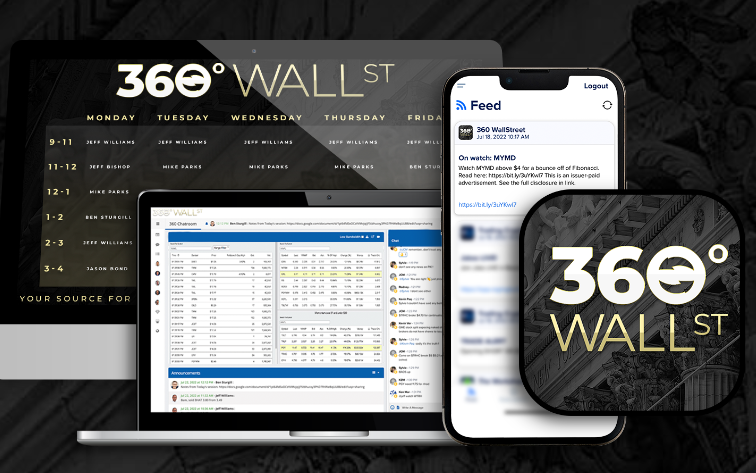 Remember, I wouldn’t know about this great setup if it wasn’t for my Dark Pool Scanner. It’s one of my TOP Idea generation tools. Get yours today to get the EDGE you need..

When would a trader want to sell a put spread (also called a bull put spread)?

This trade is best utilized when a trader has a stronger opinion that a big technical support level is going to hold as opposed to the stock or ETF reversing sharply higher off of that support level.

Since the trader is a net seller and collecting a premium, the trade benefits from both time decay and rising stock prices.

The trade is also statistically proven to provide better odds of success than many other trading strategies, such as simply buying calls.

What are the basic mechanics of a bull put spread?

Since the trader is selling the put with the higher strike price (higher premium), a bull put spread is established for a net credit (or net amount received).

If you think a stock can hold support at $205, you might want to:

The trade profits when the value of the spread declines over time.

The maximum a trader can make on this trade is limited to the net premium received (2.40 x 100 = $240 in this example) minus any broker commissions.

The maximum profit is realized if the stock price is at or above the strike price of the short put (higher strike) at expiration and both puts expire worthless.

To find the maximum that can be lost on the trade, find the difference between the strike prices minus the net credit received (plus commissions).

The maximum loss risk is realized if the stock price is at or below the strike price of the long put at expiration.

What’s the breakeven point of the trade?

To find the breakeven point, take the strike price of the short put (higher strike) and subtract the net premium (credit) received.