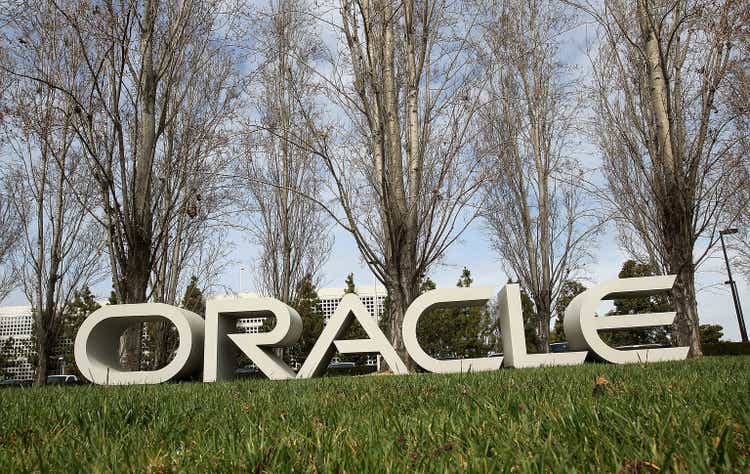 ORCL stock may seem like a good investment in the tech sector at a time of market volatility and interest rate hikes. Many investors like large, non-expensive tech companies with good and predictable growth rates. Oracle (NYSE:ORCL) fits this description.

However, the company is not positioned well to benefit from further industry growth. Oracle is likely to lag behind its peers and looks like a value trap.

The cloud computing industry has been thriving in recent years. Businesses around the world are actively implementing cloud technologies. Companies now are facing an enormous amount of troubles from supply chain management to recruitment issues. COVID-19 pushed the economy to go digital accelerating the growth of the cloud market.

IDC survey found that 55% of organizations use hybrid cloud to some degree and therefore need cloud software. This confirms that the cloud computing market will get a big boost in the next decade. According to Businesswire, the global cloud market is expected to grow to $947.3 billion in 2026 at a CAGR of 16.3%. At the same time, as-a-service solutions, which are Oracle’s main sources of revenue, remain the fastest-growing segment.

It is important to note that the Oracle addressable markets will grow at almost the same rate as the whole cloud computing market.

Oracle looks obscenely cheap, given that the 1Y forward P/E and P/S do not exceed 20x and 4.5x respectively.

If we look at the growth rates though, then everything becomes much clearer. Oracle is just growing too slowly.

Oracle’s debt burden is significantly higher than its competitors. The company carries $75.86 billion in debt. At the same time, debt repayment is not a priority for the company. This is because Oracle is heavily investing in mergers and acquisitions and a buyback program. At the same time, shareholders’ equity has been steadily declining since 2018 and fell in the negative zone in 2022.

Net debt/EBITDA reached 2.92x, which is below the critical level of 3x, but the company is not going to curtail its strategy and will continue to increase its leverage.

It is important to understand that leverage is not usually an issue in this industry as companies have good margins and their cash flows can easily handle high debt load. In addition, thanks to external capital, enterprises strengthen their positions in the market, thereby bringing value to shareholders.

While this might be true for the whole sector, it is certainly not true for Oracle. Although the execution risks are higher than ever, the company will likely be able to service its debt in the future, thanks to the expected massive cash flows. Oracle uses borrowed funds to finance its mergers and acquisitions. The problem is that the purpose of acquisitions is to expand the number of addressable markets and the ecosystem, not to improve the cloud infrastructure.

As for the return of capital to shareholders, financing dividends and buybacks with debt is a vicious practice that damages the long-term prospects of the companies like Oracle which already has a huge debt problem.

Oracle has lost the competition

Oracle is lagging behind its competitors. According to Statista, citing Synergy Group, the company’s share of the cloud infrastructure services market in the second quarter of 2022 was 2%.

One of the reasons Oracle has lagged behind the competition is its slow transition to the cloud. A full-fledged Oracle Cloud Infrastructure was launched only in 2016, competitors did it much earlier.

Customers are reluctant to use the Oracle infrastructure due to the quality of the ecosystem, its complexity, and poor customer experience. Gartner rated Oracle infrastructure as a tier 2 cloud system and said that it “remains a bare-bones ‘minimum viable product,’ and it is arguably too minimal to be viable for a broad range of common cloud IaaS use cases.”

Besides, Gartner also noted that Oracle uses sales strategies that scare away new customers. So, the company threatened to raise the cost of database licenses if the customer chooses another cloud provider.

This is the problem with Oracle. Instead of developing a quality product for many years and then not threatening its own users, the company spent tons of money on M&As and buybacks&dividends, while increasing the leverage and exploiting old technologies. The actions of management do not provide any value to shareholders in the long run but only exacerbate the situation.

Management found a solution to slow growth rates by returning capital to shareholders and expanding addressable markets. This is not something the value long-term investors should look at. However, the company is still behind the competitors and the management doesn’t have a strategy to win new customers and compete against bigger peers like AWS, Microsoft, and Google.

All of the above are signs of a value trap. The company cannot provide value to its shareholders in the long run.