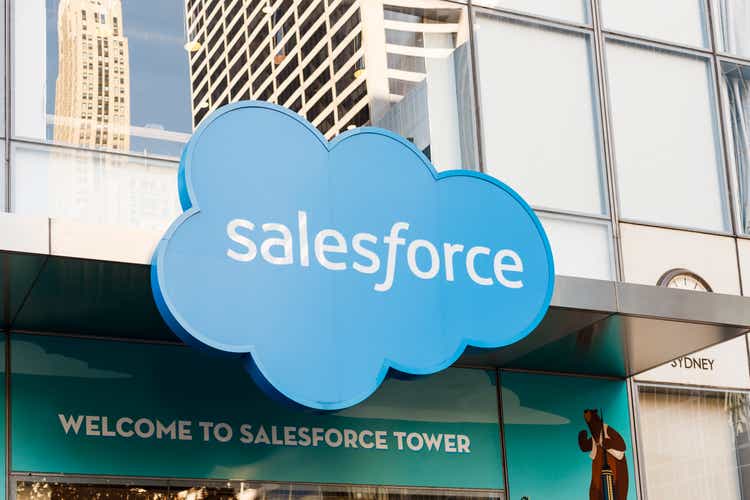 Salesforce, Inc. (NYSE:CRM) is slated to report its highly anticipated FQ2’23 earnings release on August 24. As SaaS stocks were hammered, the enterprise cloud computing leader’s stock has come under significant pressure over the past seven to eight months.

However, we postulate that enterprise software stocks have likely bottomed out in July, including CRM. Notwithstanding, CRM still trades at a discernible premium against the King of SaaS, Microsoft (MSFT). However, that premium has withered down significantly as CRM’s valuations have crumbled since November.

We also posit that Salesforce’s focus on maintaining its operating profitability could help spur a re-rating as it improves its adjusted EBIT through FY24. We are confident that the market has re-rated CRM following the market’s bottom in July. Therefore, we are convinced that its July lows should hold resiliently, and further downside should be relatively limited from the current levels.

Accordingly, we revise our rating on CRM from Hold to Buy.

Investors’ focus has understandably turned to assess the macroeconomic headwinds’ impact on enterprise IT spending. Given Salesforce’s global revenue base, it’s susceptible to a global downturn, including the headwinds from Europe.

Furthermore, recent channel checks by Street analysts indicate that enterprise IT spending could come under further pressure as the macro headwinds intensify. UBS (UBS) also highlighted in a recent note, as it articulated:

Our latest round of checks with the company’s partners felt incrementally worse than 3 months ago. It doesn’t sound like Q2 was too challenged, but every partner flagged a weakening demand backdrop, longer sales cycles and deal down-sizing, suggesting that the macro impact on IT spending is rolling through every software sector. (The Fly)

We think the checks seem credible, as we noted similar commentary from recent earnings highlights from enterprise software companies. Particularly, elongated sales cycle has been one of the main bugbears accentuated by companies’ management, as the economic downturn spurred more cautious spending. Therefore, we wouldn’t be surprised to hear Salesforce highlighting some of these concerns in its upcoming earnings card.

Notwithstanding, the company’s 360 strategy has been beneficial in maintaining Salesforce’s robust revenue growth despite the near-term headwinds.

As seen above, Sales Cloud’s growth has recovered remarkably from its nadir in FQ1’22. It has helped to compensate for the recent weakness in its high-growth Service Cloud segment as its growth rates normalized markedly over the past few quarters. The company’s holistic strategy in helping companies in optimizing their cloud computing spending has been invaluable, as the company noted in a June conference:

This combination of using high growth with high optimization kind of technologies that allows organizations to weather these [economic downturn] moments. And so Sales Cloud won’t sort of have these big ebbs and flows. You just see more predictable growth because it’s served by these 2 technologies as well. Service is another great example. In moments where maybe acquisition, that we have to repeal back some of the marketing spend with events or whatever, we’re going to focus on retaining customers at that time, and that’s where Service Cloud tends to lead the way. So [we] just think, again, the 360 strategy because we’re helping businesses optimize their go-to-market, optimize their relationship with customers, that’s why this is a great category of technology to be in because we are there to serve the most urgent and important needs of our clients no matter what department they sort of originate from. (Barclays Virtual Software Bus Tour)

The company’s remaining purchase obligations’ (RPO) growth has also remained robust in Q1, as it posted growth of 20% YoY. Therefore, even if there was a deceleration in new deals moving forward, we expect its RPO metric to remain resilient.

Notwithstanding, we urge investors to pay attention to management’s commentary on its RPO growth and parse for any marked weakness moving ahead.

Look Ahead As Valuations Have Likely Factored In Headwinds

Also, the consensus estimates (very bullish) suggest that Salesforce’s adjusted EBIT growth could recover from its nadir in FQ1/Q2 through FY24, even as its topline growth could moderate.

Therefore, we are confident that the Street has already modeled for a slowing growth climate, which justifies the battering in CRM since November 2021. However, the company’s continued focus on driving profitability should help CRM sustain its beaten-down valuations.

As seen above, CRM’s TTM P/FCF hovered close to the two standard deviation zone below its 5Y mean at its July lows. Therefore, we are confident that the market has de-rated CRM significantly to account for its near-term headwinds.

Despite the recent recovery from its July bottom, we are confident that CRM could still be re-rated further as it climbs out from its nadir.

Is CRM Stock A Buy, Sell, Or Hold?

We revise our rating on CRM from Hold to Buy.

We are confident that CRM has likely bottomed out in July, in line with our assessment of the market’s bottom. Therefore, we postulate that CRM should lead the enterprise software group out of its malaise moving ahead, despite near-term headwinds.