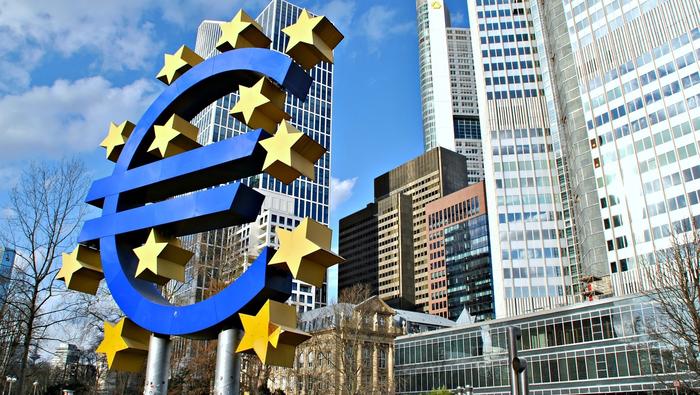 Fundamental Forecast for the Euro: Neutral

The Euro had a mostly positive week, gaining ground against six of its seven major counterparts. The top performing EUR-cross was EUR/JPY rates, which added +0.87%, reversing sizable losses earlier in the week. The single currency also posted gains against the trio of commodity currencies: EUR/AUD rates gained +0.68%; EUR/CAD rates increased by +0.63%; and EUR/NZD rates edged higher by +0.29%. EUR/CHF rates also added +0.68%, their first gains after falling for seven consecutive weeks. The lone decliner was EUR/USD rates, which fell by -0.45% following the July US jobs report.

The second week of August sees a much quieter Eurozone economic calendar than in previous weeks. Over the coming days, there is only one ‘high’ rated data release, while there are less than ten ‘medium’ rated data releases. The dog days of summer are here.

Here are the key events in the week ahead on the Eurozone economic calendar:

After lagging for much of 2021 and 2022, the European Central Bank continues to posture in a manner that suggests the gap between the ECB and other major central banks’ main interest rates will narrow further.

After delivering a 50-bps rate hike in July, the largest such increase since 2000, rates markets are discounting a 100% chance of a 25-bps rate hike in September and an 88% chance of a 50% rate increase, which would bring the ECB’s main rate to 0.50%. Rates markets are pricing the ECB’s main rate to rise to 1.13% by the end of 2022. The ECB continues to balance concerns between multi-decade highs in inflation, weakening growth, and a resuscitated Eurozone debt crisis. 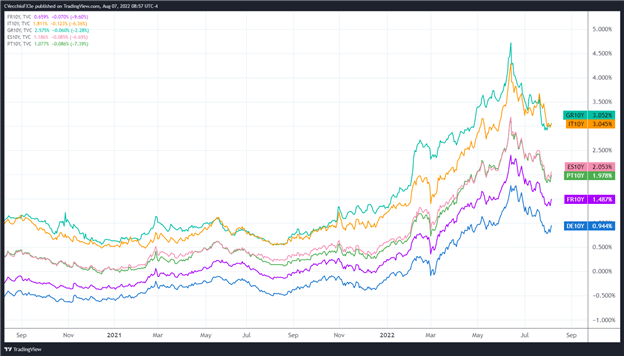 Thus far, the ECB’s efforts to prevent fragmentation – the widening of yield spreads like during the 2010s Eurozone debt crisis – in the bond market are working. The anti-fragmentation tool, the Transmission Protection Instrument (TPI), only appears to have been initiated recently, whereby the ECB has sold some of its core debt holdings and used the proceeds to purchase periphery debt. The continued success of the ECB’s efforts to prevent yield spreads from widening out is a necessary precondition if the Euro has any legitimate chance at staging a more significant rally over the next few months. 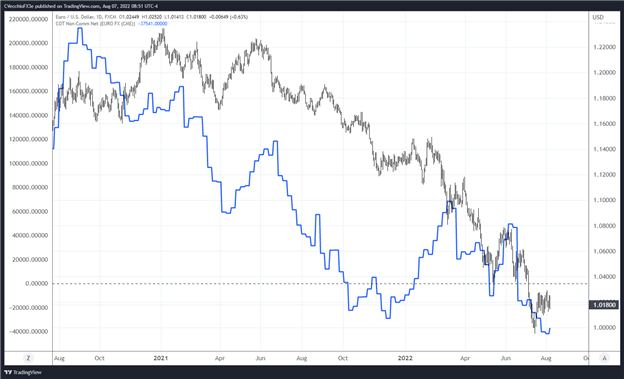 Finally, looking at positioning, according to the CFTC’s COT for the week ended August 2, speculators decreased their net-short Euro positions to 37,541 contracts from 41,875 contracts. Euro positioning is has been net-short for eight consecutive weeks, the longest such streak since March 2020. The potential for a short covering rally persists.