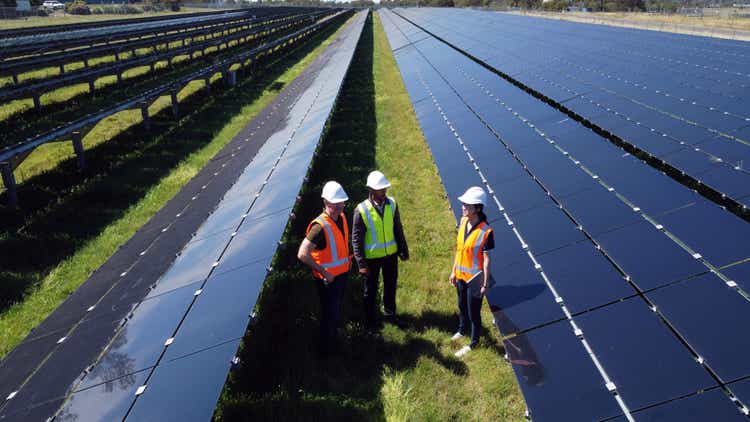 Note: I have covered Shoals previously, investors should see this as an update to my earlier article on the company

The solar industry has been on an extraordinarily choppy journey over the last few months. Just take a quick look at the latest Seeking Alpha Shoals Technologies (NASDAQ:SHLS) news to get a glimpse of the solar events that have gripped the market recently. Shoals is no exception to this, riding the same dips and surges as its counterparts.

The duty of a good investor is to look at how business performance affects a share price – not the other way round. Particularly true for high-beta stocks like Shoals, where the stock price is a lot more volatile than the numbers of the underlying business. In that regard, I believe that Shoals is performing well and that the long-term outlook for the business is strong. The company is making meaningful reinvestment for the long term that I believe are going to bear fruits for investors.

Tapping Into The Untapped EBOS Market With A Superior Offering

As a leading provider of Electric Balance of Systems (EBOS) solutions, I do not believe that Shoals is as heavily reliant on market tailwinds as solar panel manufacturers are. This is because a large part of Shoals’ strategy is converting existing solar facilities to use its EBOS offering. That is where the untapped opportunity comes in Europe, where the majority of the market still uses conventional ‘home-run’ systems. However, there is still growth in new installations, which has been highlighted by Enphase’s (NASDAQ: ENPH) recent results where they have seen strong growth in Europe as natural gas prices have soared. Considering those tailwinds and the fact that Shoals’ product is one of limited adoption in the US – the opportunity is large.

Nonetheless, The US government is still heavily committed to the energy transition, most recently providing a 24-month tariff exemption for imported solar panels, this was welcomed in a letter by Shoals CEO Jason Whitaker.

‘Mission critical’ is a term coined a lot by management and shareholders, but what does it really mean in relation to Shoals and its industry? It’s the important role EBOS components play in the transfer of electricity. EBOS, in its essence, is the system responsible for taking an electric current from a solar panel to an inverter which in turn takes it off to the grid. If these components fail, there are high consequences due to lost revenue and equipment damage. It also brings health risks as a result of fires. The products don’t just allow customers to avoid mishaps and downtime, they also drive greater efficiency as fewer labor hours are needed to maintain the system.

Shoals’ superiority in EBOS is evidenced by the fact 50% of new solar installations in the US in 2021 used its EBOS solutions, while half of all solar projects use some form of Shoals component/solution. Demand for EBOS continues to gain ground as expected, with Shoals converting seven new customers to Big Lead Assembly (BLA). Most importantly, the company is gaining momentum in Europe, as three of these seven customers came from that region in the first quarter. I expect this to quickly accelerate as Shoals develops a bigger foothold in the European market. Considering this, it’s clear to see why the company opened a new facility in Portland (TN), This will allow Shoals to double its EBOS manufacturing capacity – the next leg of expansion is here.

Shoals delivered $86 million in revenues for the first quarter, this was up 49% YoY and 41.6% QoQ. The gross margin was 38.7% and the operating margin was 5.5%. The company’s backlog is incredibly strong at $302 million, this increased $3 million from the prior quarter and underpins Shoals’ strong growth prospects. Adjusted EBITDA ($16.5 million) grew slightly slower due to reinvestment into SG&A to fuel growth. Even prior to IPO, Shoals outlined its intent to do this through reinvestment in the likes of its international sales team and expanding its personnel.

Both of Shoals’ new markets – international and battery storage – are starting to have an impact and turn the needle on results. In the quarter, Shoals announced components revenue increased by 73% while system solution revenue increased just 40%. Whilst this revenue mix is causing a slight near-term hit in margins as the system solution revenues are of higher margin, I believe this near-term pressure is worth it due to the increased foothold Shoals is now getting in the international and battery storage segment – a key focus for the company.

Whilst Shoals are feeling the brunt of near-term pressures related to supply chain difficulties, the firm has still reaffirmed the lower end of its guidance. Shoals has a compelling competitive advantage over its peers with its innovative EBOS solutions. EBOS represents a massively untapped market not just in Solar, but also in battery storage and EV charging infrastructure as well. Shoals is essentially operating in a high-growth segment of a high-growth market, which makes the opportunity very attractive. Shoals is a ‘buy’.