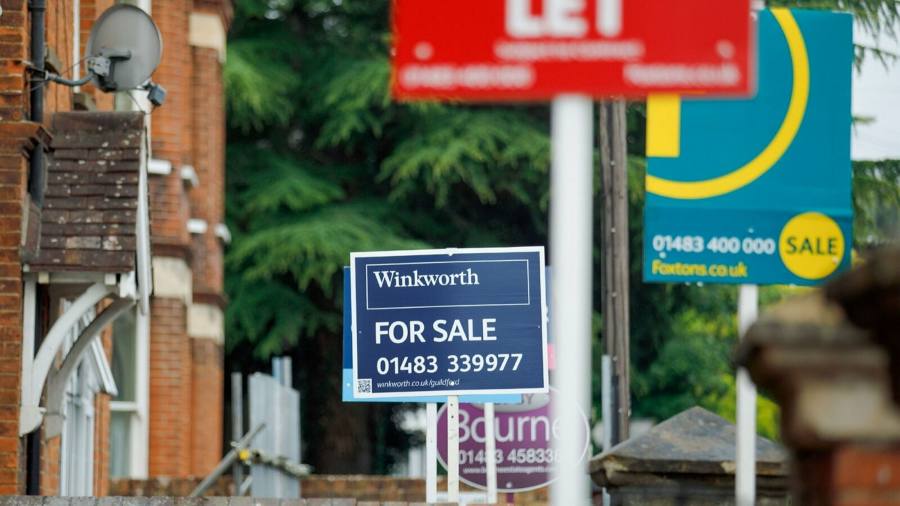 UK house prices rose 7.8 per cent in the year to June, a slowdown from the 12.8 per cent annual rate recorded in May, the Office for National Statistics said on Wednesday.

However, the slower rate of increase was skewed by “the rises in [house] prices seen in June 2021, which were the result of tax break changes”, the ONS noted.

The increase comes despite a recent jump in mortgage costs, following the Bank of England’s decision to boost its benchmark lending rate from 0.1 per cent in December to 1.75 per cent this month in an effort to curb inflation.

Economists expect more rate increases this year, further adding to mortgage repayments. Andrew Sentance, a senior adviser to consultancy Cambridge Econometrics, on Wednesday said the BoE’s key rate may need to rise as high as 4 per cent because policymakers had fallen “behind the curve”.

Prices have also been buoyed by a lack of properties on the market.

News of the house price rises came as the UK’s rate of inflation jumped to 10.1 per cent in July, the first time it has recorded a double-digit annual increase in more than four decades.

Jean Jameson, chief sales officer at estate agent Foxtons, said that although London reported the lowest annual growth of any UK region, the capital’s 8.2 per cent increase from July 2021 represented the “biggest change in annual property price since July 2016”.

“Property prices grew at a faster rate in outer London than in inner London, increasing 7.7 per cent and 4.7 per cent respectively,” said Jameson. “We may even see housing prices plateau in some inner London boroughs in the coming months.”

Persimmon, one of the UK’s largest housebuilders, said in its interim results on Wednesday that it had sold homes for an average of £245,597 in the first half of 2022, up 4 per cent from the same period last year. It added that the rise in sale prices was mitigating inflation in costs.

But sales rates for the first seven weeks of the second half of the year were down 11 per cent year on year. Speaking at its earnings presentation, chief executive Dean Finch said it was too soon to tell whether that marked a summer lull or a longer-term downtrend.

“In those areas where we have control, we are making good progress,” said Finch, but he added that the removal of the government’s Help to Buy scheme and wider economic pressures presented challenges for next year.

“I think that Persimmon is going to be OK,” he said. “It will probably see an adjustment next year but it will come out the other side of it.”

There was a “big bundle of self-help” that Persimmon could use to help support its sales, he added, such as doing more part-exchange with its customers.

Shares in Persimmon were down almost 2.4 per cent by lunchtime trading in London, more than the wider blue-chip UK stock index.