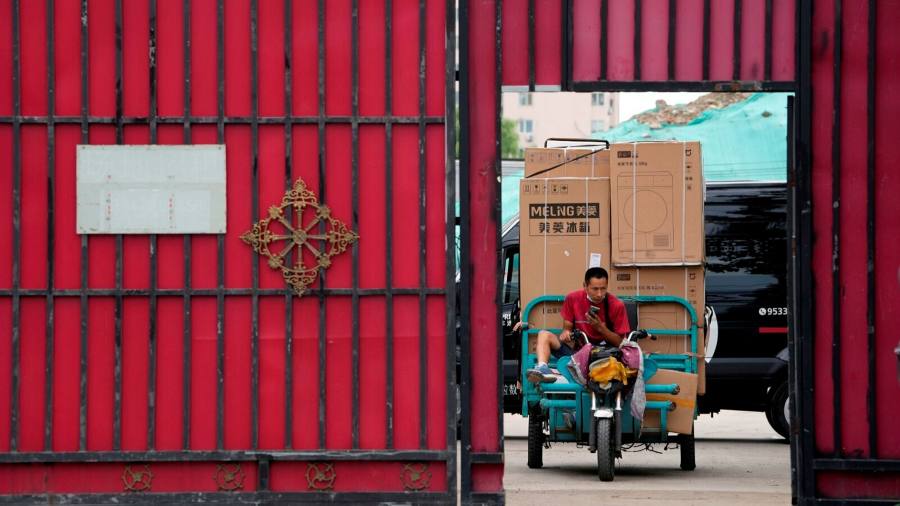 China has cut a crucial lending rate in an effort to shore up growth as the world’s second-biggest economy is buffeted by repeated lockdowns and a worsening property downturn.

The People’s Bank of China on Monday reduced the medium-term lending rate, through which it provides one-year loans to the banking system, by 10 basis points to 2.75 per cent, the first cut since January. Analysts polled by Bloomberg had expected the PBoC to leave the rate unchanged.

The decision highlighted deepening anxiety in Beijing as it tries to combat a months-long decline in consumer demand triggered by its drawn-out zero-Covid policy, as well as the fallout from cash-strapped property developers and slowing global growth.

Despite Beijing’s plans to inject hundreds of billions of dollars of stimulus to boost growth, China’s economy only narrowly escaped a contraction in the second quarter.

Official statistics released on Monday reflected worse than expected consumer and factory activity as the pace of the country’s economic recovery drags.

Retail sales, an important gauge of consumption, rose 2.7 per cent year on year in July while industrial production, a growth driver earlier in the pandemic, was 3.8 per cent higher. Analysts had forecast rises of 5 per cent and 4.6 per cent, respectively.

Experts expect China’s economic slowdown to prompt looser monetary policy and fiscal stimulus, but some are pessimistic about the scale and pace of Beijing’s response.

“China’s growth in [the second half] will be significantly hindered by its zero-Covid strategy, the downward spiral of the property markets, and a likely slowdown of export growth. Beijing’s policy support could be too little, too late and too inefficient,” said Ting Lu, Nomura’s chief China economist.

Analysts also noted that Beijing’s central bankers had been reluctant to lower rates amid concerns about rising debt and inflation.

“But the PBoC seems to have decided it now has a more pressing problem. The latest data show lacklustre economic momentum in July and a slowdown in credit growth, which has been less responsive to policy easing than during previous economic downturns,” said Julian Evans-Pritchard, senior China economist with Capital Economics.

Xi Jinping’s zero-Covid policy — which institutes strict lockdowns wherever outbreaks of the virus are discovered — is inflicting further strains on the outlook.

Several Chinese cities, including Haikou on the southern island of Hainan, as well as Urumqi in the western Xinjiang region, have imposed or extended lockdown restrictions in some areas, with cases rising nationwide over the weekend. The Hainan lockdown has sparked small-scale protests among tens of thousands of travellers who have been left stranded in the tourist destination.

In Shanghai, authorities are testing the use of drones to ensure residents scan their health codes when they enter buildings. The health code is recorded on a compulsory smartphone app that determines whether individuals can travel based on their exposure to Covid-19.