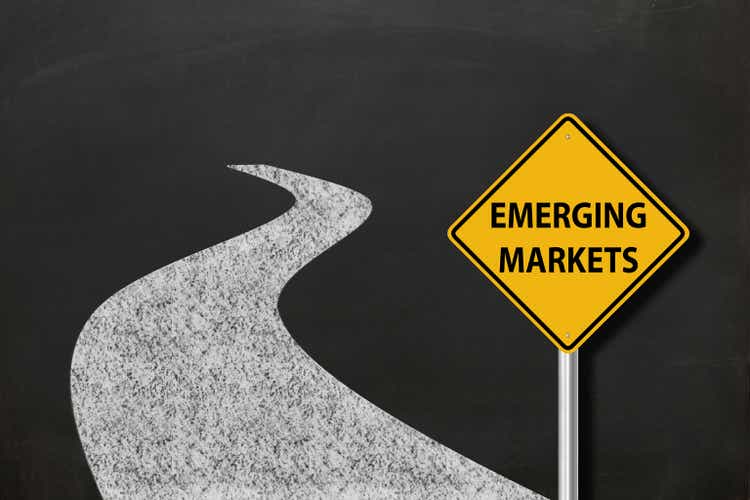 The combination of falling U.S. bond yields and an improvement in risk appetite over the past three weeks has seen emerging market sovereign bonds recover strongly off their mid-July lows. However, yields remain highly attractive, with the iShares J.P. Morgan USD Emerging Markets Bond ETF yielding 7.1%. This compares to a 20-year average of around 6.2% and suggests strong long-term returns, with little downside risk from current levels even under a credit crunch scenario.

The iShares J.P. Morgan USD Emerging Markets Bond ETF (NASDAQ:EMB) seeks to track the investment results of an index composed of U.S. dollar-denominated, emerging market government and government-backed bonds. EMB holds bonds of governments with more than USD1bn outstanding and at least two years remaining in maturity. EMB was one of the first emerging-market debt ETFs to be launched, as such, it tends to enjoy strong assets and liquidity. Total assets sit at USD15.4bn and average daily turnover is USD537mn. The ETF holds over 30 EM government bonds, with the top 10 holdings making up just 6.7% of total assets. The fund charges an expense fee of 0.39% which is relatively high for a bond fund but is still low relative to the current yield to maturity of 7.1%. In terms of credit quality, just over half of the issuers are investment grade, while the average maturity is 12.9 years.

We can break down the 7.1% yield to maturity on the EMB into the yield on the equivalent maturity U.S. Treasury and the spread above this which reflects default and liquidity risk in emerging markets. As I argued in ‘U.S. Bonds: Backing Up The Truck’, U.S. Treasuries are good value at present, with yields still above long-term inflation expectations and real GDP growth likely to continue disappointing over the coming years. Regarding the current yield spread over Treasuries, it is currently around 4.4%, which is over 100bps above its 20-year average. Taken together, the 7.1% yield is 90bps higher than its 20-year average. Over this period, we have only seen spreads materially higher during the global financial crisis and the Covid crash.

This high yield reflects the fact that both Treasury yields and spreads have risen together over the past 18 months, which is quite a rare occurrence. Indeed, there has been a strong inverse rolling correlation between UST yields and EM credit spreads over the past 20 years, the reason being that UST yields tend to rise during periods of risk appetite and strong growth, which tends to also compress credit spreads, and vice versa. The simultaneous rise in UST yields and credit spreads this time around reflects the impact of the Fed’s tightening cycle, which suggests there is potential for both to fall if a more dovish tone is adopted as I expect.

While developed market government bonds tend to perform poorly during periods of inflation, the main threat facing emerging market bonds such as those that comprise the EMB is a deflationary credit crunch the likes of which we saw in 2008 and 2020. The reason being that during such periods credit spreads tend to widen much faster than UST yields decline.

However, even if we see a repeat of 2008 or 2020, the current high yield may still allow the EMB to generate positive returns. As we saw in these previous credit crunches, aggressive interest cuts in response to collapsing inflation helped the EMB recover sharply by lowering UST yields and compressing credit spreads by supporting risk appetite. While yields on EM government debt reached double-digits at their peaks in 2008 and 2020, 12-month returns were strongly positive even in those years when measured from the point where yields rose above current levels.

The iShares J.P. Morgan USD Emerging Markets Bond ETF is priced to deliver strong returns over the long term, with an impressive yield of 7.1%. There is also the potential for strong capital gains in the event that the Fed adopts a more dovish tone and the risks of a credit crunch recede. Even in the event of a deflationary credit crunch of the likes seen in 2008 and 2020, the high yield implies that returns are likely to be strongly positive.